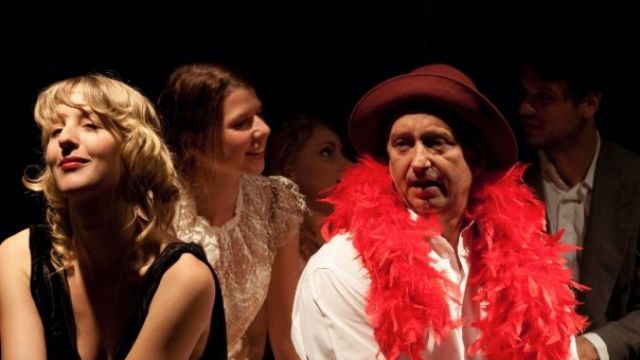 This production, directed by Bob Pavlich and billed as a play with music, was a dramatization of March’s 1928 poem that included popular songs from the era.

The chemistry between singer Kathleen Spaull and pianist Munro Melano was instantly captivating and both performed brilliantly. Kathleen’s pack-a-day timbre, laced with a sweet touch of G&T, captured the feel of each song perfectly.

Adrian Mulraney, chanelling Robert De Niro/Anthony Hopkins, presented an unexpected interpretation of Burrs that wasn’t far off the mark. Each of the four characters he played were convincing and his transitions seamless.

I was surprised by the decision to include fixed microphones for the actors. It would have been clearer if the performers had used the microphones when addressing the audience and not when they were presenting the drama. Changing constantly was just unorganized. Jane McArthur took up the challenge and used her mic to create intensity to very good effect.

Tilly Legge – who definitely is ‘leggy’ – captured just the right amount of beauty and distain as the eminent Queenie. A perfect compliment to Adrian’s ruffled Burrs.

Jacob Pruden and Caroline Bainbridge both appeared disinterested in their performances, not willing to give everything for their character. A perfect example was Jacob’s unimpressive violence that you would expect from early high school students. When presenting a character, give yourself completely, don't cop out and hope for the best.

Overall, a cogent effort that, with a bit of tightening, could have been a very impressive representation of this vibrant tale.