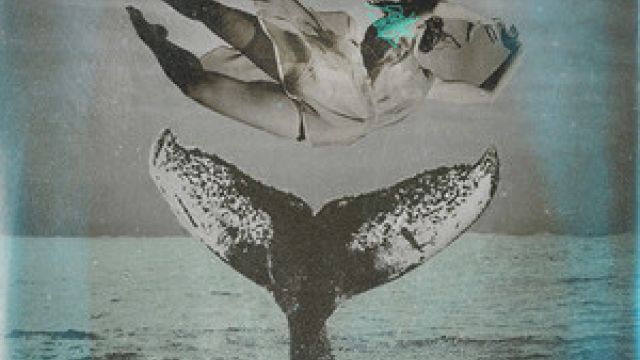 The Wild Unfeeling World by Casey Jay Andrews is a wonderful and thrilling one-woman show that has been inspired by Herman Melville’s ‘classic’ novel, Moby Dick. Like Bram Stoker’s Dracula, Melville’s Moby Dick has surfaced a number of times in this year’s Adelaide Fringe and Festival shows.

Why this is so is curious, nonetheless, it is clear that these two great novels, and their respective dramatic adaptations and references, have major universal themes about humanity and inhumanity that is still resonate with today’s world. They are both ‘Romances’, in the ‘classical’ definition of the word and genre, as they are ‘a journey’ through darkness with the breaking of dreams, to enlightenment, acceptance and transformation.

As the wonderful Ms. Andrews states in her ‘Prologue’, this is not really a version of Melville’s masterpiece and very long novel. This is a 60-minute story about a modern woman living in London who goes on a journey through the course of one day that has significant parallels and resonances with part of Melville’s Moby Dick. This includes using some of the names of the characters in the novel, and invariably in a truly delightful and engaging way; for example, Moby Dick is now a cat with whom the young woman is engaged in a battle of hatred and the desire for revenge.

The dramatic narrative shifts with great speed, from the modern-day story to Melville’s Moby Dick. It is thrilling and constantly engaging. This is primarily due to Ms. Andrews’ wonderful presence, talent and skill in telling a story. She is alone up on this bare, small, open stage, with not much in regard to lighting and other theatrical elements to help her. However, she herself is dynamically theatrical, imaginative, smart, witty, passionate, committed, clear and thrilling to experience. Absolutely top-notch dramatic storytelling.

Production-wise, Ms. Andrews draws on whatever is available and possible within her next-to-nothing budget, as well as her immediate audience. This includes tiny figurines to represent characters, such as Moby Dick the Cat, as well as at one point using members of the audience to help her re-enact a stormy sea from Melville’s Moby Dick with small buckets of water. It is hilarious, utterly irreverent to Melville’s novel, but theatrically wonderful and still able to make a point as well as being faithful in essence to Melville.

The fabulous theatricality, wit and humour of Ms. Andrews and her one-woman play is balanced by some rather poignant passages and observations about being a woman in modern-day London. When one has fallen from grace in this particular world there is often little real help. At one point early in the play, the female character in desperation calls her friend and ex-flat mate (who had kicked her out of the flat in the first place) for help, The response she gets is a text message that expresses sympathy for her current state, but adds advice that she needs ‘to find someone who will support you’; in other words - not her. This is a rejection, and it is cruel and hurtful. This use of a modern-day expression of personal rejection also features significantly in Kieran Hurley’s Mouthpiece that is part of this year’s Adelaide Festival. The fact that this appears in two contemporary dramatic works from the UK and is used for similar effect and purpose gives it significance. It reveals this seemingly acceptable, well-intended passive-aggressive rejection of a friend in need as a deliberate act of selfish self-preservation and cruelty. In both plays audiences are challenged with this statement – would you say this to a friend in need?

The conclusion of this terrific little gem of a play and performance differs from Melville’s Moby Dick. Ms. Andrews ultimately identifies the modern-day female character with the character of Ishmael in the novel. Both are survivors, but whereas Melville’s novel has a tragic tone to its conclusion with the devastating sense of loss, Ms. Andrews offers hope. Her character accepts her fate and situation, especially her relationship with Moby Dick the Cat. Acceptance leads to enlightenment, the getting of wisdom, a new maturity, and a way forward not just for her but for all women. Wonderful and powerful.