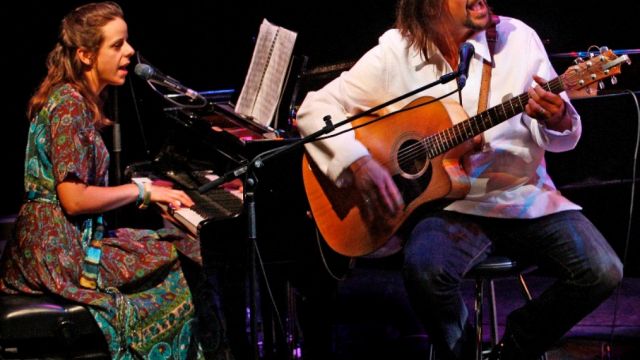 Most people of a certain age, with barely a passing interest in Cat Stevens know that he was a prodigiously gifted English singer song-writer who’d achieved phenomonal success in the late 1960s and 1970s, who abruptly walked away (albeit temporarily) from music when he converted to Islam in 1978. The effusive publicity material which accompanies this show leads you to believe you are about to catch a rare, behind the scenes glimpse into Cat’s private world.
Not so much. Sure, Paul Dillon is gifted with similar vocal timbres to his idol (while stopping just short of possessing the earthy, masculine ‘bottom end’ which was unmistakably Stevens’ trademark) and even possesses a modicum of the Stevens’ charisma, but the ‘story telling’ component of the show is lightweight, even coy. With no era-evoking set pieces or even a backdrop to set the tone, the show itself is little more than your standard, cabaret-style tribute. Yes - the band (conisisting of pianist and extra guitarist – both of whom also gave back-up vocals) did sound fabulous in the big Parade Theatre but the large space only served to emphasise the sparseness of production values. The most compelling moments were when Dillon sang solo or with just piano accompaniment. Taking nothing away from Sarah-Louise Younger’s obvious talent, her inclusion in the line-up just felt intrusive – particularly when she stepped in to sing a verse of ‘Father to Son’. Call me a purist but I would have preferred an added violin and some proper percussion instead. Nevertheless, Dillon’s adoration of his idol is infectious – half the audience gave him a standing ovation – but one couldn’t help but feel that Cat Stevens himself was the true recipient. I came away feeling I’d taken this amazing artist for granted and resolved to research what had become of Yusif Islam. After all – we all know he didn’t die, but after seeing this show you could well be forgiven for thinking that he had.