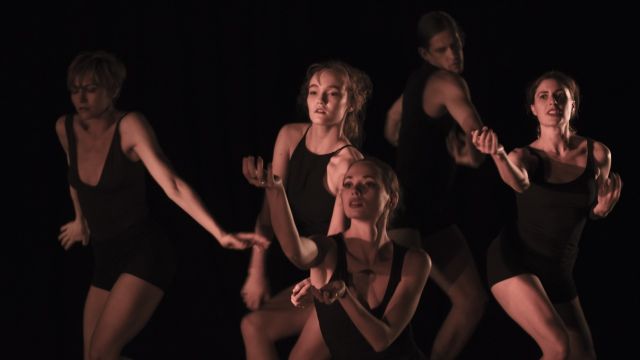 Choreographer and performer Omer Backley-Astrachan sees dance as a language – a form of communication “to be witnessed and reflected”.

Such is the challenge of contemporary dance. It requires an empathetic, compliant audience, willing to yield to the to the messages expressed, and prepared to translate and interpret them based on their own experience … and perhaps a brief suggestion from the choreographer.

In this ‘double bill’ of his work, Omer Backley-Astrachan has explored differing aspects of human relationships using choreography that is both sensitive and perceptive. In Wildebeest, Backley-Astrachan looks at “the artifice of social behaviour through a distillation of human interactions”.

He establishes a small world where his performers are brought together in intricately expressed movement, then separated by distance and stillness. Stripped of the façade of costume or finery, they are alone, reaching out across barren space, some searching, some tempting. They make contact, or are rejected. Such is the essence of relationships and liaisons.

The haunting sounds created by Kieran Warner-Hunt bring them together in complex sequences of delicately contoured intimacy, or leave them static and alone, isolated from the possible tenderness of love and the laughter of children.

Every movement in this human artwork is carefully considered and sensitively performed. Whether in tiny gestures or the complicated interlacing of bodies, this work implies a compassionate understanding of the convolutions of relationships. In this work, a small society of four co-exist on a “frozen and desolate Arctic island”. In a Sartre-esque situation such as this, the perplexities of confinement, personal space and the human need to belong are framed through sensitive, emotive interpretations. There is loneliness and isolation, envy and despair, joy and interdependence.

All are portrayed though sophisticated choreography that combines smooth articulated interchanges and carefully controlled realignments that depict the aspects of “solitude, vulnerability and sensuality” that would be intrinsic to the cold, isolated place that Omer Backley-Astrachan has imagined.