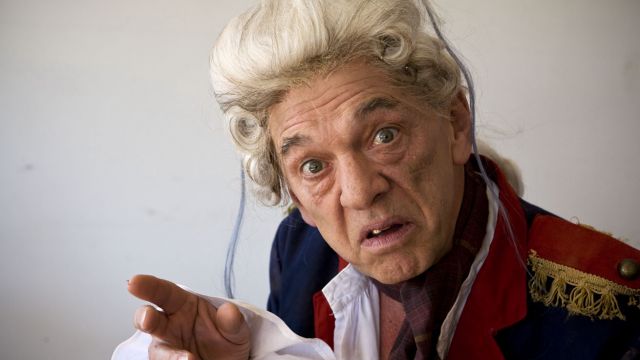 ‘You are the sum of all you’ve been and done.’ What then for an actor who has played numerous parts from villains to heroes? Do they know who they’ve really been and what they’ve really done when they have been playing other people? As well as playing other people they’ve had to play themselves with all the trials and tribulations of being one of many in a flooded industry, wondering what will happen next, struggling for parts and countless rejections.

William Zappa is so real in this play, even though the program states, ‘not autobiographical,’ you feel that in his life he could have dealt with some of the issues raised in the play. Zappa is such a consummate actor; he is so interesting to watch, so moving. This play is a short, primarily one-man play about actor ‘Robert Winter’. Set in an actor’s dressing room, before he goes on to play Monsieur Thenardier from Les Miserables, Winter experiences a myriad of thoughts, memories and experiences from his life. These moments in the dressing room lead to what appears to be a breakdown, where he comes to the point of feeling he can’t go onstage.

Set in the confines of a small dressing room with a tired looking couch, clothes rack, and make-up table and yet so much happens to this one man in the moments leading up to his evening’s performance. You really feel so much empathy for the character in just over an hour of watching him.

There are hilarious moments where he does what appears to be ‘facial yoga’, talks about and slags off ‘the industry’ saying pessimistically ‘You get a role if you look right,’ talks to himself in the mirror, looks at his aging body and pulls it about, acts out being an orthodontist and, more than anything, talks to the Monsieur Thenardier wig, which sits on a naff old material head with a drawn-on face.

Zappa’s script gives us insight or a ‘behind-the-scenes’ look at the life and frustrations of an actor. There is also an emphasis on how the roller coaster lifestyle of an actor is perhaps not conducive to the normalities of family life and there is great inner tragedy over the death of his son, Danny.

This play shows the vulnerabilities and existential aspects of an actor’s personality. Zappa has the extraordinary talent of seamlessly morphing into a character. When he dons the wig and costume of Monsieur Thenardier, he miraculously morphs into the character like a magician. Towards the end of the play, Winter mimes a piece about the world, morphing into this Commedia dell’arte style character.

Winter’s Discontent is definitely worth checking out, especially if you’ve always been fascinated by the life, times and experiences of an everyday actor like Robert Winter.