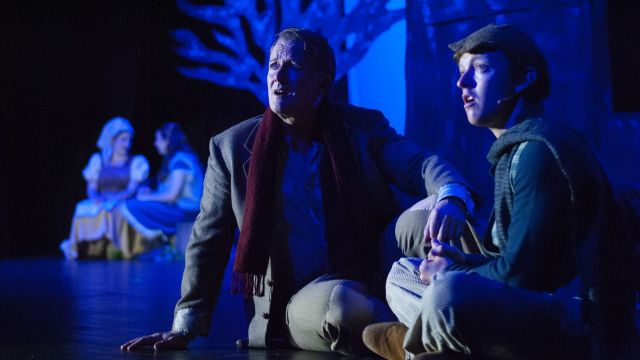 In Stephen Sondheim’s 90th year it is fitting to celebrate his life and indulge in a performance or two. The Savoyards community theatre group tackle Into the Woods – a sprightly 30-something, having premiered off-Broadway in 1986 – and its 28 musical numbers. This is a show that has attracted more than a dozen major awards for every avenue from writing, music, acting to lighting, set and sound design. Proudly community-based since 1961, the Savoyards group certainly shows their experience in deft handling of this challenging musical piece that intertwines the plots and characters of several tales by the Brothers Grimm and Charles Perrault. While Sondheim’s choice of fairytale characters makes it easy to impart the ‘be careful what you wish for’ moral with humour, it is demanding for performers to show the emotional connection to deal with the bigger themes of longing, loss, disappointment and death that are part of going ‘into the woods’ – the lesson to take a risk or avoid living a full life. This cast manage both sides of Sondheim’s challenge. It is difficult to single out any one performer in this consistently excellent ensemble production. Everyone is in fine voice and no one seems stretched by the complex musical material. The sets and costumes are pristine in a production that really reflects community theatre at its best. Interestingly, the only characters that Sondheim didn’t borrow from the pages of children’s tales – the Baker and the Baker’s Wife (supposedly inspired by his own parents) – are the strongest in evoking an empathetic connection. Astin Hammermeister and Andrew Dark make a forceful couple, holding the loosely strung plot together in their quest to retrieve the elements deemed by the Witch, played to the hilt of creepiness – and glamour – by Jacqui Cuny. Reinterpreting the cast of principals is Paige McKay (absolutely superb as the feisty Red Riding Hood), Tavis Bancroft (an endearing Jack of Beanstalk fame), Lara Boyle (Cinderella meets Sex and the City), Julie Eisentrager (hilariously mixed-up Millennial Rapunzel). Elyse Rea, Georgina Purdie and Erika Tucker have fun as Cinderella’s Stepmother and Stepsisters; Conor Ensor and Tony Ahchay milk every moment as the rakish Princes; there is a splendid showcase scene for David McLaughlin as the Wolf; and Warryn James adds a touch of Broadway banter with his Narrator. This group is ably supported by a clearly confident ensemble – including the strong stage presence of Sonja Bancroft as Jack’s Mother, Luke O’Hagan as Cinderella’s Father and Tammy Linde as Granny. The cast even have fun with their version of Milky White, even though this character has presented many a stage company with the challenge of portraying a cow! My only regret is that the 16-piece band could not be accommodated on stage because, even in their position outside the auditorium, they added great energy and quality to the production. Under the musical direction of Matthew Semple, they were the best live musical theatre orchestra I’ve heard in a community theatre production.

Sondheim and Lapine don’t shy away from reminding us how gruesome these bedtime tales of old can be. The second half of Into the Woods makes it overly long, but does impart the creators’ darker themes. It’s easy to see why the writers may have been intrigued by the theory that fairytales help children solve existential problems. This was at a time in the mid-1980s when we lost so many dream-makers in the arts, and friends were searching for answers while striving to hold on to their dreams.

Savoyards aim to provide a place for the local community to be involved in the arts. They create a welcoming atmosphere and an eagerness to have a wonderful experience at the Star Theatre, where the volunteers are plentiful and friendly – I was greeted at my car, the door held open in VIP style – like something out of a fairytale!