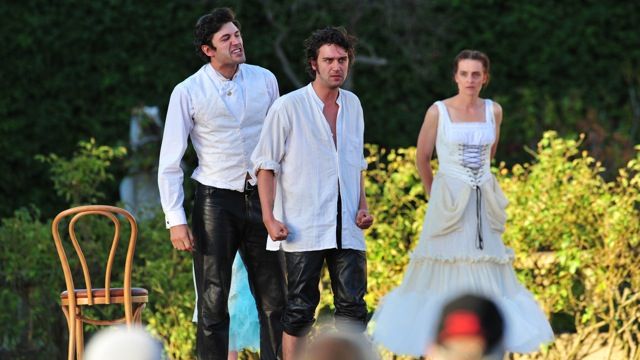 The setting is sublime, the lawns of Rippon Lea House at twilight, the audience picnicking in front of the simple rostrum stage, the gloriously formal array of trees and shrubs as the backdrop. And then there is Wuthering Heights, Emily Bronte’s sprawling Gothic novel adapted by Vince Foxall (who has received acclaim that continues to baffle me).

If ever a play cried out for a seedy set in a less than glamorous old theatre like the Athenaeum, with its shabby proscenium arch, it is this one. The beautifully manicured surroundings of Rippon Lea fight the imagined seediness of Wuthering Heights at every turn, though The Grange is somewhat more believable in these surroundings, as a more gentile country estate. As it is, there is no way to establish atmosphere, and with only two Bentwood chairs as a “set”, it is impossible to lose yourself in the play and suspend disbelief. Thus we are totally at the mercy of the actors and director to tantalise and bewitch us and lead us deeper into the story, whilst the setting is all the time railing against it and pulling focus (not helped by a talented seagull who must, by now, surely have its own agent.) Greg Carroll is a director whose work I have admired in the past, and I am excited about his upcoming direction of Glory Dazed at Red Stitch, but for me, and many of last night’s audience, he failed to capture the visceral nature of Cathy and Heathcliff’s all consuming passion. It’s difficult when there is no sexual chemistry between the two talented young actors playing Heathcliff and Cathy. If we don’t believe that this is a fire, a lust rather than a spiritual love, a knife edge balancing act between love and hate that cannot be assuaged by any one else in their lives, then we simply cannot connect with the characters, nor understand why Cathy and Heathcliff’s passion is called “the second greatest love story of all time” (Romeo and Juliet is presumably the first). It’s even more difficult when faced with Foxall’s text which is disjointed, expositional with awkward time jumps backwards and forwards, and devoid of the lyricism and poetry in the Shakespearean offerings this company brings each year so successfully. The language is flat and dull….and the emotions follow.

The play uses both volumes of the book, and so Cathy is dead little more than halfway through, and we then follow the miserable lives of the second generation.

Cathy and Heathcliff come off as monstrous characters, and indeed that is true of the novel. But where there is sympathy for a love they cannot control, or move past, in the novel, here there is none, no passionate connection, and we simply dislike them…..intensely. They are vile and miserable human beings. That’s not to say that the smouldering Michael Wahr and the delightful Ciume Lochner are not good actors. Clearly they are, but they cannot create what isn’t there. Alec Gilbert seems uncomfortable as Lockwood, who narrates much of the story, tripping over lines and slow to pick up cues. Hunter Perske as Joseph is convincing but for those unfamiliar with the novel there is no clear explanation of who or why he is part of the story. Acting honours go to Spencer Scholz who gives us, in Edgar Linton – the foppish fool who marries Cathy – and Hareton Earnshaw, the illiterate but ultimately loving second cousin of young Cathy – two believeable and sympathetic characters beautifully played. Helen Hopkins gives a sound performance as Nelly and Rain Fuller is never less than interesting as Isabella Linton, besotted with Heathcliff and made to pay for it, and Frances Earnshaw, the ill fated woman of low repute who marries Heathcliff’s “brother” Hindley and dies bearing a child. There are so many characters (seen and talked about) that it’s hard to keep track of them all, and very few have any real impact on the central core…which is ( or should be) Heathcliff’s journey through intense passion and the pain of betrayal to vengeance and ultimately surrender.

Occasionally films do get it right, and dropping the 2nd generation to focus on the destructive relationship of the two lovers has worked in the past. For those who have loved the love story on screen, this offering will neither delight nor satisfy them, so rent the movie. Even Bronte purists will find it difficult to engage, let alone care. And that’s a pity, because this company is one of Melbourne’s great treasures.