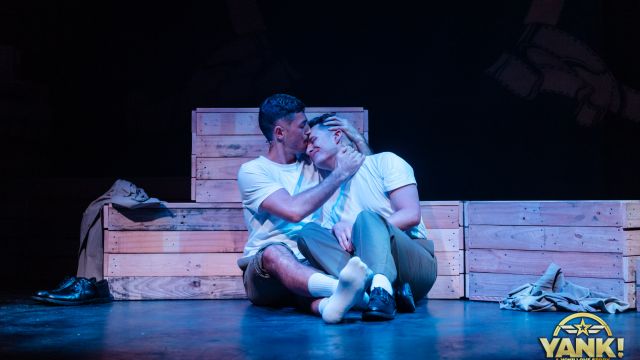 Independent musical theatre company Understudy Productions keep gloriously punching above their weight. Their Men of Sondheim collected kudos for its look at the songwriter’s work through gay eyes, Edges introduced the songs of Pasek & Paul long before they became flavour-of-the-month, earlier in the year Naomi Price was electric in a well-reviewed revival of Sweet Charity, and now they’re showcasing the first Australian production of Yank!, a gay love story of two soldiers during World War II.

Yank! was first seen at the New York Musical Theater Festival in 2005 and later in 2010 played a successful season at the York Theatre, New York, and in London in 2017. The songs are melodic, the lyrics literate, and the plot has something you don’t often find in modern musicals these days, heart.

18-year-old Stu enlists in the army, gets a job on the Army magazine Yank, but not before he meets the hunk Mitch. Stu become hopelessly smitten as they become much more than friends, but Mitch vehemently remains in denial despite returning Stu’s affection. It’s played out over a period of time when both guys are shipped out to fight in the Pacific theatre of war, with a bittersweet ending. Ian Good’s direction was clean, the performances were honest, and the vocals (especially the group harmonies) were a delight. The male company (all eleven of them) excelled in Dan Venz’s tight choreography with “Click” a tap-duo standout by Andy Johnston (Stu) and Eli Cooper (Artie). Johnston as the innocent Stu had enough ingenuousness to sink a battle ship with buckets of vulnerability and charm. Alex Gibson-Giorgio as Mitch, the object of Stu’s affection, looked the part and sang like a Rodgers and Hammerstein hero making the most of the elegant “Rememb’ring You”, which recalled Jerome Kern ballads of the period. Cooper’s swishy turn as Artie, the Yank photographer who looks out for Stu, had a nice been-round-the-block edge to it.

Naomi Price, as the only woman in the cast, did sterling work in a variety of roles from a radio songstress and girl-next-door, to a closeted lesbian WAC who wants to pull strings to prevent Stu from going to the front and getting killed. She wiped the floor with “Get It, Got It, Good” and excelled with “The Saddest Gal What Am”, a plaintive moan to Uncle Sam taking the best men for the forces and leaving the dregs at home.

David Zellnick’s book has the ring of authenticity, whilst his and his brother Joseph’s score is pleasantly nostalgic, with the purposeful whiff of songs from Hollywood movies of the period. The set, by director Good, nicely reflected tinsel-town with the MGM logo without the lion upstage centre, Elizabeth Ball’s costume details were excellent (although did they really have fly-zippers on trousers in the forties?), whilst Trevor Jones pulled a robust and danceable sound from the orchestra.

It has everything you want in a musical and it’s probably the best production from an independent company you’ll see on our stages this year. Don’t miss it!

Reviewed at the Preview performance 4 July 2019