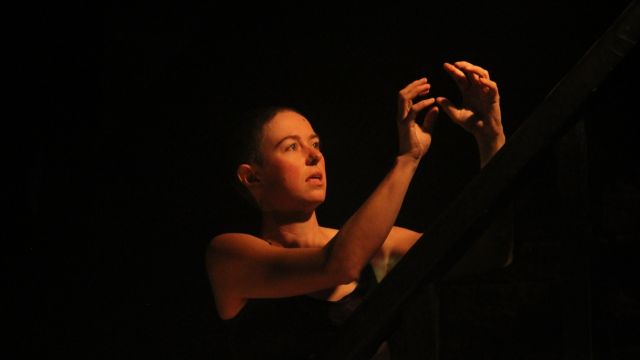 Lily Fish is a marvel - a protean, highly physical performer.  She tells tales illustrated by the tiniest but clearest gestures, her hands like minimal puppets.  With her buzz cut hair, she brings to mind Falconetti in Dreyer’s The Passion of Joan of Arc, but then, with her mobile face, she becomes a rather blundering Old Testament God at the dawn of creation.  Then she’s God’s ‘mistake’, Lilith, made like Adam from the primeval mud.  Later, in total contrast, an unhappy romantic wondering why love has failed.  Then she jumps on a box and becomes a toothy, goofy stand-up comedian with a curiously rural-sideshow-for-the-gullible feel.  Moments later, she’s a seductive Salome (Lilith reborn – Lilith never went away) and a terrified John the Baptist – terrified more of Woman than of Death.

Ms Fish uses all the La Mama space: the stair rails are prison bars and a strip club pole, and she even at one point perches on a window sill – and that is like being crucified.  Not only does she do all this – in ways that are frightening, hilarious, knowing, tender and riveting – she has woven the poetic, mythic, allusive monologue that runs for over an hour.  And she delivers it with a force and conviction that has the audience totally focussed on the solitary figure on stage.  At the end, as she takes her bow, we glimpse what seems to be shy person who has shown great courage in putting herself on that stage – and is somewhat amazed that we got it, and at the applause we give in return. In this, Ms Fish has been ably assisted by director Andrew Gray – even if all he did was to supply reassurance and expert feedback on movement, emphasis, timing and clarity.  The stage is draped in multi-coloured wools of varying lengths and thicknesses – metaphor and metaphoric set dressing – designed by Melanie Liertz – who has also designed Ms Fish’s very adaptable costume: a simple dress, a cloak, a spieler’s coat, a shroud, an ‘Eastern’ houri’s dance costume…  Bronwyn Pringle’s lighting and projections, and Baz Thomas’ sound design work perfectly – seamlessly integrating with story and performance, weaving together the abrupt changes in persona and style.

The most naturalistic, ‘real world’ sequences are when Ms Fish is a ‘modern’ woman – an illuminating reversal of fierce Lilith and vengeful Salome.  A woman flattered to be chosen by a man, giving all and then (inevitably we feel) disappointed, heartbroken and withdrawing when romantic expectations or needsaren’t met.  Ms Fish’s transformation here into a yearning, vulnerable, sensual woman makes for an unsettling contrast with the rest by its eroticism and truth.

All right, you might complain that this show isn’t too relaxing.  It’s not: it’s hard work; concentration is required.  You might anxiously wonder, at the show’s start, with its highly compressed prose poem language, directed straight to the audience – like a prophet’s thunder - ‘Is the whole show going to be like this?’  But it isn’t.  You get inside it, so to speak.

Yes, a certain familiarity with the myths of Lilith, Adam and Eve, as well as the tale of Herod, Herodias, Salome and John the Baptist is necessary to understand and appreciate the gist and force of Ms Fish’s argument – and it is an argument.  It is an argument about male and female and the war between them, aggravated by the struggle for dominance, by the moulding force of myth and legend, by misogyny, fear, rage and revenge.  You might also carp at the avowedly feminist import, but that’s unlikely: Ms Fish is too absorbing, too funny and entertaining, and her feminism so intriguingly original that you are just swept along.

Yet again, La Mama presents something risky, imaginative and fresh.  Do support this show and the theatre.