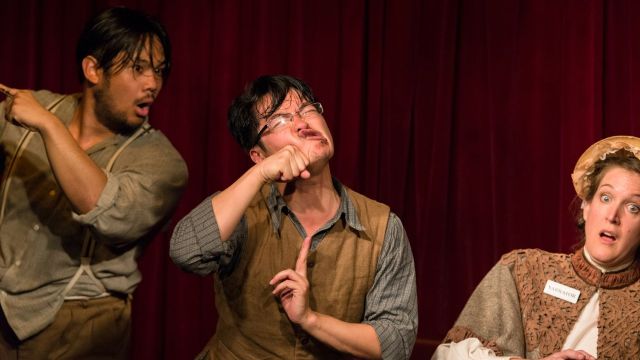 By Jane Miller collaborating with director and cast, based on the 1895 novel of the same name by Major General Kenneth MacKay. 15 Minutes from Anywhere Company for Poppy Seed Festival. The Butterfly Club, Melbourne CBD. 17-29 November 2015.

Take a racist, paranoid, melodramatic novel of the late 19th century about a Chinese invasion of Australia, masterminded by evil Russians, but resisted by some dinkum blokes.  Add an agile writer, three highly talented cast and a bold, inventive director.  Mine the novel for every cliché, stereotype, stock character and situation. Note the disturbing parallels with contemporary racism and paranoia. Improvise, rehearse and, I assume, fall about laughing.

The Yellow Wave (try substituting the word ‘horde’ for ‘wave’ and you get the idea) certainly had the audience laughing almost without pause for its entire length – not just at its jokes, wit and ironies but with delight at the instant character transformations by two fellows – Keith Brockett and John Marc Desengano - in drab brown outfits.  Mr Brockett is slim and compact: he does a fine cosmopolitan aristocrat and a simpering sweet young gel.  Mr Desengano looks like a rugby forward and he does a fine, stoic Aussie hero – named ‘Dick’ – and a more forward sweet young gel.  Between them they create about fifteen characters.  I’m guessing here as I lost count, but there is no confusion: every soldier, salt-of-the-earth bushman, horseman, jockey, strapper, shy maiden, not so shy maiden, hypnotist, Russian count, Russian soldier of fortune, Chinese mercenary, Scots squatter, et al. are all perfectly delineated in gesture, posture and voice.  Of course the show would not be half as funny if all these characters were played seriously and naturalistically by more than two fellows, but who’d want that?  And as an added bonus – preposterous as the story is – you actually care what happens next! There’s also the Narrator (Andrea McCannon), in 19th century bonnet and shawl.  Her part is less flashy, but no less skilled and entertaining.  As well as her poker-face narration, with only a raised eyebrow as pointed comment, she corrects the characters’ pronunciation and at various times plays a masseuse, a train passenger and, highlight of the evening, a horse.

For once at the Butterfly Club, there’s no piano on stage – just a high backed bench, something like a church pew.  Like the cast, it doubles and triples and quadruples: a stable door, a ship’s rail, a train seat, a squatter’s dining table, a trench in a battle.  It also provides a screen behind which Mr Brockett and Mr Desengano can disappear – like a blackout – only to reappear seconds later as someone else.  Director Beng Oh, who has proven already both a capacity for risk and great sense of humour, keeps the show rocketing along at a pace that could be exhausting if it were not so much fun.  Don’t miss it.