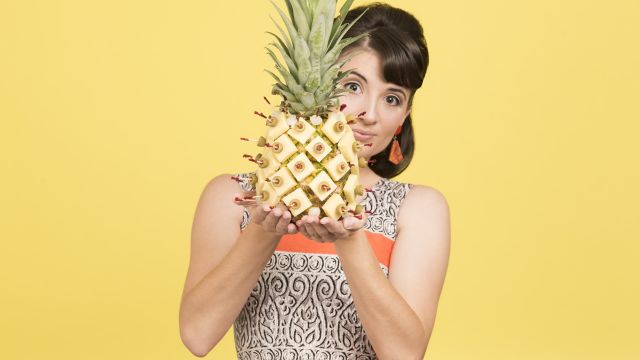 Noëlle Janaczewska is an Australian playwright, poet and essayist who specialises in writing about people and events that “have been overlooked or marginalised in official records”. In this play she has taken as her inspiration the history of Penrith Regional Gallery & The Lewers Bequest and through it “traces the roots of Sydney’s early Modernist thinking and offers a fresh take on Emu Plains in the 1950s”.

In the 1940s, Gerald and Margot Lewers, leading artists in the development of modernism in Australia, bought a property at the foot of the Blue Mountains. Their home became a mecca for the creative cohort of the time. Patrick White described it as a place where “ideas hurtled, argument flared, voices shouted, sparks flew”. After Margot’s death in 1978, the house, gardens and many of the artworks were bequeathed to the local community. Thus, the Penrith Regional Gallery was born. Janaczewska sets the play in the kitchen of the artists’ home, where the ‘hired help’, Iris and Leo, prepare food for a party that occurs off stage. As guests arrive they

collect coats and serve hors d oeuvres – their own lives and conversations a stark contrast to the more bohemian visitors and their heady discussions. Janaczewska accentuates the time with quotations on the food and etiquette of the time that appear on the ‘kitchen’ wall – much to the quiet amusement of the audience.

Katja Handt’s set places the play perfectly. Food is prepared at a scrubbed table, curtains cover some of the cupboards, a large washing up basin dominates the bench space. My grandmothers’ kitchens have been recreated on the stage! With walls, furniture and appliances etched in charcoal-like shading, the kitchen is like the set of a 1950s black and white TV program.

As is Nick Atkins’ direction. There is a sense of the past in the blocking, a past where people knew their place but were aware of changes that were coming. Actions are precisely modulated, the characters obviously discussed and developed with care and the cadences of Janaczewska’s poetic dialogue skilfully rehearsed. Kate Worsley is beguiling as Iris, a twenty-year-old finding her place in a society that is still affected by post war economies and definite ideas about ‘a woman’s place’. She cleverly finds the suggestion of questioning and awareness of new ideas that Janaczewska has woven into the script, making her Iris a little bit bold and forward thinking.

As Leo, a Biology teacher new to Australia from Hungary, Adam Booth is convincingly reticent, but also direct. He chops and fries field mushrooms as precisely as he avoids giving away too much of his opinions or his real feelings about Australia’s failure to recognise his teaching qualification.

On the stage beside them, cellist Me-Lee Hay deftly accompanies the action, sometimes subtly, at others more obtrusively as scenes become more agitated, dialogue more intense.

There is much in this play that inspires thought and discussion. Hopefully it will be one that goes on to reach a larger audience.