Yeomen of the Guard by Gilbert and Sullivan 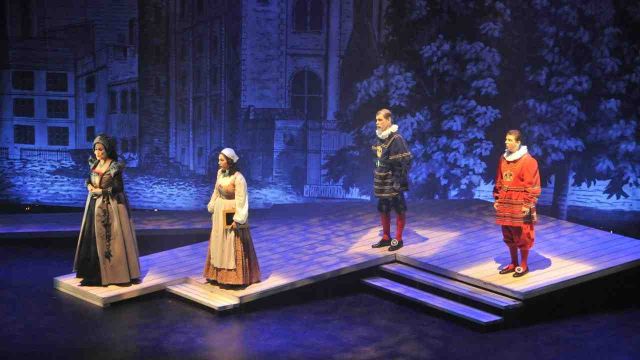 I attended the Gilbert and Sullivan Society’s last performance of Yeomen of the Guard and it was disappointing to see a half empty auditorium when many had been offered cheap tickets. Having left my run late I paid $44, which is a lot to pay for an amateur show, which is out of copyright.
However, it was much more successful than others I have attended by this company. The lead character is Jack Point usually played by a character baritone. Robert Latham was more than that, having a well-trained light baritone which he used very well. He also portrayed all the comedy and pathos one would want in the role.
In a highly talented cast, the two lovers were a little disappointing. Stephanie Gibson has a bright attractive voice but the role of Elsie requires more warmth. Brett O’Meara has a character tenor rather than a romantic tenor voice required for the romantic lead. However, the two looked good and portrayed a convincing couple.
Kate Amos played a coquettish Phoebe and sang well while Andrew McGrail was a different Shadbolt. Often played as a grotesque man, there was none of that and he presented an ordinary small man doing a job which wasn’t viewed favourably by the general population. He sang well, but the character could have been bigger.
Lynlee Williams was a strong Dame Carruthers and worked well with Desmond Lukey as Sergeant Merryl, but the outstanding voice was chorus master Kevin Kelley as the Lieutenant. The sets, costumes and orchestra all made positive contributions.
Curtains had been removed to use flats, which meant the audience could see into the wings. Not a good look, but overall this was an enjoyable production.
Graham Ford