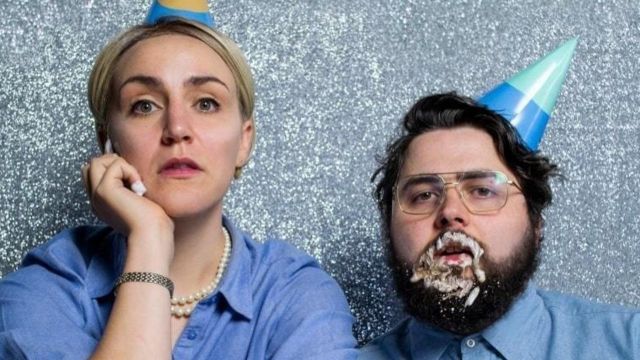 As the audience is still taking its seats, a mother and father are manic in the detail of their preparations for their son’s fourth birthday. The mother (Mary Angley) barks at the father (Yoz Mensch) to move the cake table into the perfect position.

It all begins real enough, anxious parents doting on their almost-four-year-old son (sit in the front row if you really want to feel the love). To warm us up, we’re treated to a hilarious explanation of what makes a ‘hot dad’ by a seductive Angley, sensual poetry on ketchup, and a raw example of couples’ intimacy in their bathroom etiquette. Quickfire realities soon project to a multimedia experience that swings like a whacked piñata from surreal to starkly now. The brilliant coupling of Angley and Mensch sprinkle guilty contradictions of compostable plates and plastic tinsel onto buttered, white, middle-class bread, hyping the angst of climate change to Mad Max and a particular South African billionaire.

Part of the genius in Angley’s words is its sharp wit and intelligence; the other part is making it seem normal, relating the unlikeliest meetings to a future reality that feels just a couple of steps away from now. Combining comedy in many forms – visual, verbal, physical and satirical – we’re still laughing when we realise the responsibility of that future is ours. Performances from Angley and Mensch are both anarchic and touching (sometimes simultaneously), and the design is dazzling: all sparkly set, bold lighting, and aural excess (the latter from Dan Thorpe).

There are call-backs from Angley’s other Fringe show (as director), Autoeulogy, taking on similar themes of the end of the world, and the two shows work well together as an evening’s entertainment, particularly as they follow each other in the same venue.