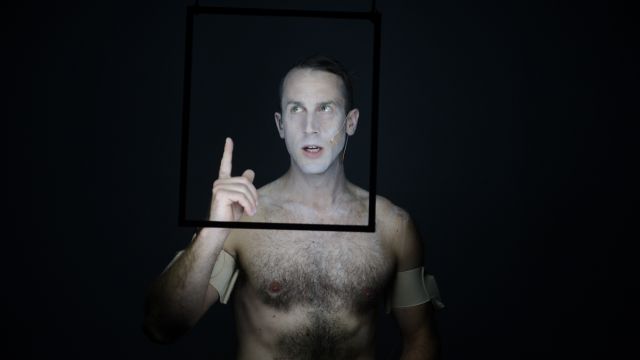 If you have friends who’ve seen this intriguing, exciting, challenging show, tell them shut-up; you’ll see it for yourself, thanks very much.  To describe it in too much detail doesn’t mean giving away some brilliant plot twist.  It means giving away not one but two remarkable coups de theatre.

Each elicits an audible gasp from the audience, as if they doubt the evidence of their own eyes and their sense of what they thought they had understood.  There is much muttering on the way out about ‘how the hell did they do that?’

Let’s just say that this presentation/performance is about time and space (as well as a couple of other things).  Relativity and quantum mechanics come into it.  What is time, anyway?  What is our place or your place or his/her place in time?  Or place.  Maybe YOU ARE NOWHERE?  Or maybe just YOU ARE NOW HERE?  (You weren’t here, but now you are, and later you won’t be, but you are now and then, later, anyway, ‘now’ will be ‘then’, etc.) 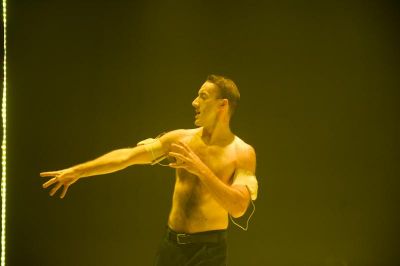 Isn’t time an arbitrary system of measurement that may or may not enable us to understand no more than a sequence of events?  For instance, what if we hear (as we do here) a sequence of brief musical extracts from the 18th century to the present, does that suggest the passing of time?  Or not?  Time had to pass to accumulate those musical styles – didn’t it?  Is it possible, given the curved nature of time that there could be a parallel universe?  Or universes?  And if so… does that simply destroy any validity your life might have?  And what does a video of an audition for the role of Starbuck in The Rainmaker have to do with any of this?  Or a Country & Western song, in full, plaintive, self-pity mode, mimed to a voice that is not Andrew Schneider’s?  As he says in one of his frenetic monologues, ‘We exist in each other’s realities… but not in the way we think we do.’

We can safely say also that this show employs and is certainly dependent on a masterful and witty sound design, instructive video clips and a disorientating lighting design, and all are the result of intricate, detailed judgement and skill, and executed perfectly.  The programme does not specify who is responsible for these absolutely integral elements.  No doubt one of Andrew Schneider’s numerous co-creators.  What is clear is that communication is reliant on technology and can be sabotaged by it and where does that leave us? 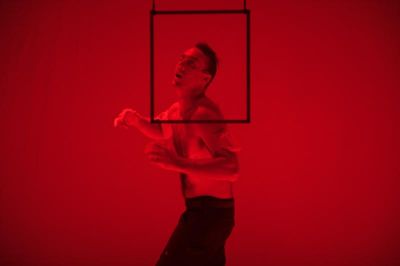 Let’s say also that Mr Schneider is a consummate performer in complete control of his body, facial expression and voice, despite the fact that his character’s efforts to explain some things to the audience are constantly thwarted by a voice in his earpiece, time constraints (get it?), bursts of blinding and/or coloured lights, electronic failures and interruptions, and ultimately his own inability to deal with the unexpected.  He is both strange and likeable.  Graceful and awkward.  Ingratiating and off-putting.  We feel for him.  We want him to succeed – more for his sake than our own – in telling us what he wants to tell us.

This is theatre in the sense that it could only be theatre and can only happen in a theatre.  In that sense alone it is hugely exciting.  Witnessing this show we are constantly off-balance.  We struggle to keep up - but in a pleasurable way since things keep being truncated or glitched or darting off somewhere else we don’t expect.  And then comes that thing that we really don’t expect…

Some might say that it’s all a bag of tricks, camouflaging the fact that it’s not really about that much, but that would be not only far too sour and unreceptive, it would also be wrong.  YOUARENOWHERE is more an edifice of brilliant tricks and is really about quite a lot.  You can think and laugh at the same time.  In fact, it’s advisable.