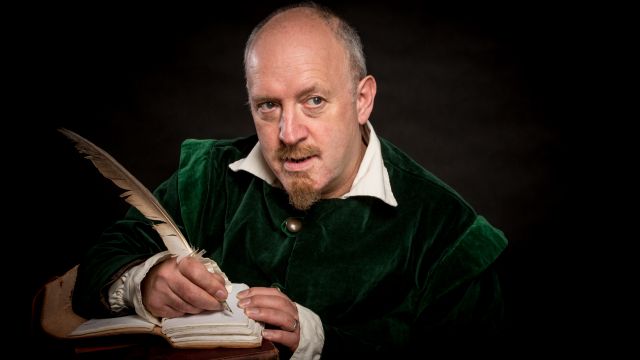 The sub-title for Your Bard is ‘An Informal audience with Will Shakespeare in the Pub’ – and that’s exactly what you get. In the intimate front bar in Treasury 1860, and in just one hour, Nicholas Collett gives you the entire life of William Shakespeare.

It is informative as well as highly entertaining, mainly due to Mr. Collett’s engaging and energetic performance as Shakespeare himself. Based on the scant evidence available, the works of William Shakespeare, and a bit of plausible conjecture, you are presented with the skeletal details of Shakespeare’s personal and professional life. This covers controversial topics, such as Shakespeare’s so-called ‘missing years’, from his time in Stratford, his marriage to Anne Hathaway, to his sudden emergence as an actor-playwright in London in 1594.

Mr. Collett presents a version in which Shakespeare was initially engaged as ‘apprentice actor’ with the Earl of Worcester’s Men, where he met Edward Alleyn, and later became part of the Lord Admiral’s Men. Whilst this is highly debatable, nonetheless, Mr. Collett’s Shakespeare is so engaging that you accept this version. One reason for this is that he successfully humanises Shakespeare, especially in regards to his personal and loving relationship with his parents and his wife.

Mr. Collett uses members of the audience to briefly play and represent these extremely important people in Shakespeare’s personal life, and it is simply delightful adding to the enjoyment and fun of the show.

It isn’t all razzle-dazzle ‘show-biz’ chat; one of the most touching moments involves the grief suffered at the loss of Shakespeare’s only son Hamnett in 1596. Whilst one could quibble in regard to historical accuracy, nonetheless, Mr. Collett presents Shakespeare’s relationship with Anne Hathaway and his parents as being deeply loving, which I found refreshing and very plausible and real.

One quibble that I can’t ignore, however, is the relegating of Richard Burbage to a relatively minor role in Shakespeare’s life. I can’t avoid it because Mr. Collett directed right at me the line, ‘I didn’t write “To be or not to be” for Burbage!” Well, in actual fact he did. I don’t think Mr. Collett would know that I am a relative expert in regard to Richard Burbage, and think Burbage’s influence on Shakespeare is extremely profound and important, perhaps more than anyone else.

Nonetheless, I enjoyed the irony of this line being directed right at me, and didn’t respond but smiled weakly, nodding in stunned agreement. The performance I saw was with a packed audience of Caucasian ‘seniors’, who enjoyed the show very much; I was one of the youngest in the audience, and I’m 60 years old.

This show, however, can be a wonderful introduction to Shakespeare, his life and work, and I thoroughly recommend it, encouraging parents to take their young folk to see this highly engaging, informative and fun piece of theatre that successfully de-mystifies and humanises the immortal ‘bard’ – William Shakespeare.