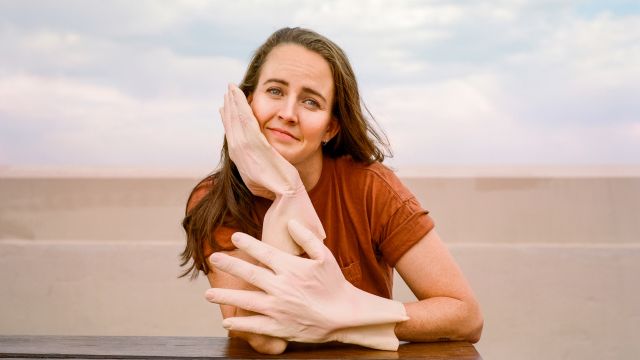 Zoë Coombs Marr is an entertaining absurdist who noodles around with time even if her stories are about her ‘ordinary’ experiences as a precocious, sexually conflicted, flute-playing teenager.  She takes a key incident from those years and spirals away from it and spirals back to it – as if she is starting her story (or stories) and the show itself, all over again.

Thus, she disrupts ‘traditional’ (male/patriarchal?) modes of storytelling – which, as she tells us vehemently, she does not like!  So, in its way – or in her way – her show is experimental – and the experiment probably interests her more than the content of her stories – which are per se quite simple.

If that sounds rather dry – or abstract and theoretical (or self-indulgent) – Coombs Marr avoids that response – that is, she hides her disruptive experiment - via her vitality, her smile, her evident enjoyment of her own jokes, a kind of ‘aw shucks’ modesty, our interest in her stories (even if they are fractured in the telling) and her very expressive face – the last conveying almost as much meaning as her words.  What she can do with her eyes is a gift.

Beginning with the elastic or illusory sense of the passage of time that most of us have in common, brought about by the lockdown (reference to which is made by many artists in this year’s festival), Coombs Marr tracks and backtracks time with repeated references to that iconic comedy phenomenon, Puppetry of the Penis.  That show, which Coombs Marr claims (not entirely seriously) ‘changed comedy forever’ began in 1998 – and it’s still going.  Not only does Puppetry of the Penis provide a constant linear marker in parallel to her personal teen story, the show itself seems to intrigue her.  Which is intriguing in itself.  She interrupts herself and muses on the lads working up their penile routines.  ‘If I pull my foreskin like this…’  Etc.

Her stories, however, include very little ‘agony’ or ‘misery’, but that title for her show is, I guess, another ironic disruption of traditional expectations.  The key experience of Coombs Marr’s teenage years, to which she keeps returning, is one she describes several times as ‘the best thing that ever happened to [her]’ – an exaggeration which she admits.  But as she skilfully builds toward what she’s made us want, which is a full description of what ‘really’ happened, she reveals that perhaps the story is not entirely true because it possibly could not have happened.  It’s been burnished and adapted by time and the tricks memory plays – memory which isn’t linear either.  And yet the incident – ‘true’ and accurate or not – provides the show with a most unexpected and delightful climax to the labyrinth through which she has led us.