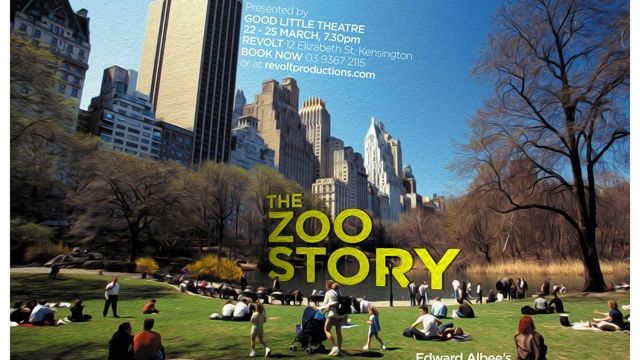 "On a Sunday afternoon in New York's Central Park two strangers Peter and Jerry strike up a conversation that will result in the most dramatic change that a person can experience in their life." So says the publicity material for the Good Little Theatre's Production of Edward Albee's The Zoo Story.

It's a neat precis in that it whets your appetite while telling you very little. But the play, Albee's first, is just that - an encounter in Central Park between family man and NYC professional Peter and the tortured Jerry, who lives alone in a boarding house.

Perhaps surprisingly given that Peter has all the trappings of Manhattan success - a job in publishing, a wife, two daughters, two cats and even two parakeets, he has a regular routine of spending Sunday afternoons sitting alone on a Central Park bench. Which is where he's accosted by Jerry, who announces his intention of striking up a conversation then proceeds to do just that, one-sided though it is.

While Peter patiently humours him, Jerry recounts long rambling tales about his trip to the zoo, his walk up to the park, his rooming house and a dog there that he hates.

It's a challenging piece to perform, particularly for Cameron McKenzie who plays Jerry, whose hard to follow thought process is complemented by ongoing moodswings. He initially seems more liberated and outgoing than the button-down Peter, ably played by Chris Broadstock - but as the play progresses, it becomes clear that both are straitjacketed by their circumstances.

Given the wardrobe of our two characters, it's clear this is being performed in period of its writing, the 1950s. This is a sensible choice from director Don Bridges, as otherwise some of the characters' behaviour would be a little harder to make sense of. Clearly there is more going here than is apparent on the surface, such as when Jerry oddly announces to Peter that for several weeks he was a "H-O-M-O-S-E-X-U-A-L" (he spells it out because he can't bring himself to say the word). And just why is Peter in the habit of spending his Sundays alone on this particular park bench anyway?

Back when The Zoo Story was first written and performed, probably only a small subsection of the audience caught the gist of this subtext, which becomes much clearer when you know the climax of the piece. For those who didn't get it, there's still plenty of blackest of black observations on alienation, loneliness and loss to focus attention on.