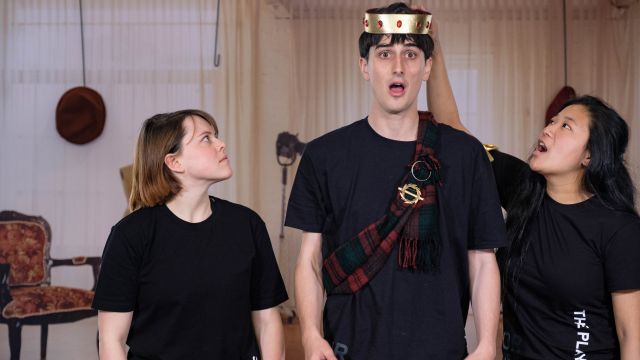 Joanna Erskine, the Head of Education at Bell Shakespeare, explains how the company transformed during 2020 and what they have in store this year.

Stage Whispers: How did Bell Shakespeare navigate around State roadblocks to tour to schools last year?

Joanne Erskine: Our Players program tours to every state and territory each year, so an entire year of planned activity had to be pulled apart. While we couldn’t physically reach schools, we turned our focus to digitising content, streaming education programs online, creating new digital content and making available archive recordings of our previous productions.

As the year progressed and interstate touring remained uncertain, we decided to scale the tour back to a limited tour of Sydney, some regional NSW and the ACT. We had to adapt the scripts and performances to fit the new restrictions, enhance the distance of the playing space between audience and performers, and remove any direct student interaction. We delivered about 80 performances rather than a planned 500+. However, we were thrilled to at least deliver this program to some schools and provide employment to our artists.

SW: What reaction did you get from schools when you arrived during this pandemic?

JE: Our Players received quite a rapturous response from schools. Both teachers and students had been so deprived of live performance that it made for a very special experience. Teachers often gave a speech before The Players performed, about the value of live performances and the arts, particularly in such uncertain times.

SW: What school productions are you taking on the road in 2021?

JE: The Players will tour three of our most popular shows nationally for primary and secondary schools; Just Romeo and Juliet! in collaboration with the hilarious Andy Griffiths, Such Sweet Sorrow, and Macbeth: The Rehearsal. The Players deliver dynamic, entertaining and enriching 50-minute performances interspersing Shakespeare’s original text with modern commentary and new narratives. Each show ends with a 10-minute Q&A and teachers are supported with pre- and post-show classroom resources.

SW: For those schools you can’t get to, what digital resources are you offering?

JE: In 2020 we set up a digital studio in our rehearsal room to create new content and deliver live streamed student workshops and Shakespeare seminars for senior students, teacher Professional Learning and more. We even delivered large-scale Artist in Residence programs lasting one week over Zoom, in collaboration with teachers in the schools. We’ll continue to offer these to schools we can’t physically reach this year.

Macbeth: The (Socially Distanced) Rehearsal – is a new video resource available on-demand. It celebrates theatre-making, great storytelling, and the power of the imagination. We’re also bringing back the Bell Shakespeare Shorts Festival, where we ask students to submit short films reimagining Shakespeare, which is open to schools and households across Australia. Online resources on filmmaking and performing Shakespeare are available.

JE: Our popular Players show, Macbeth: The Rehearsal, is the story of one director and two actors rehearsing Macbeth with hilarious and illuminating results. We could have filmed the performance, however trying to capture the magic of a live show on film is near-on impossible, so we decided to embrace the Zoom medium. We adapted the Macbeth: The Rehearsal script as if the rehearsal was taking place during quarantine. The director and two actors were each in a simulated Zoom-esque screen, meaning we could film the piece safely. Soliloquies over Zoom translate quite easily, but how about a scene between Lady Macbeth and Macbeth? How do you show Banquo’s ghost appearing on Zoom? The final battle between Macbeth and Macduff? The witches’ prophecies? We had a great deal of fun finding ways to make it possible.

SW: Do they mention the name which can’t be mentioned during the rehearsal?

JE: Well, given they were rehearsing from home quarantine and not in a theatre, yes they said the ‘M’ word!

SW: Tell us about your national teacher’s conference?

JE: In 2020 we had teachers tuning in from Philip Island to Rockhampton, Darwin and even Christmas Island WA to our teacher masterclasses.

It was such an incredible positive outcome that the idea for a weekend teacher conference online was born.

Our inaugural National Teacher Conference will be delivered via Zoom on 15-16 May 2021. It will be a weekend of talks, masterclasses, speakers, discussions and strategies – about the teaching of Shakespeare in Australian schools. Incredible speakers are lined up from industry leaders to Bell Shakespeare artists. It’s going to be packed with practical classroom strategies, as well as big meaty discussions about the way we teach Shakespeare. We want teachers to come away with real techniques to test out with their students straight away. 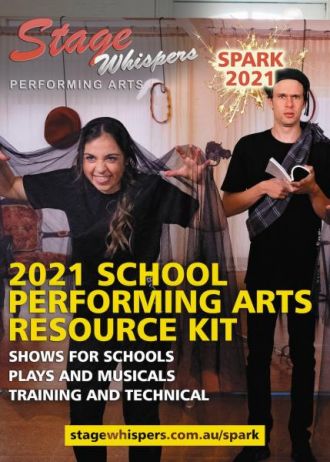 Click here to read the 2021 School Performing Arts Resource Kit - SPARK - a free on-line magazine with a guide to putting on a show and attending school oriented productions.

• Finding a musical or play for your school to stage

You can find SPARK at www.stagewhispers.com.au/spark