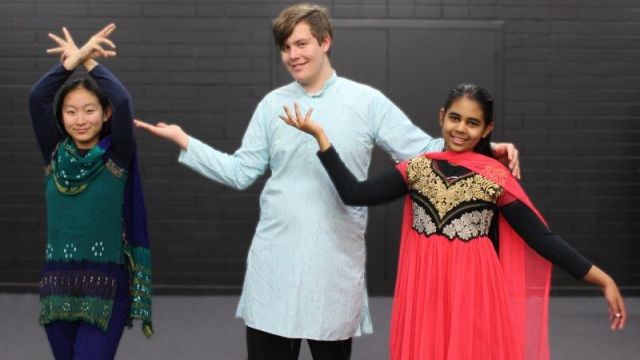 “The course of true love never did run smooth.” One of William Shakespeare’s most famous quotes from A Midsummer Night’s Dream. Little did he ever think, even in his wildest dreams (no pun intended), that one of his iconic comedies would be relocated to India and given the Bollywood Treatment!

The Heights School Players with Sally Putnam (Performance Director/Designer), Charisa Sanders (Musical Director/Choreographer) and Beth Sztekel (Props/Photography/Media Marketing/Publications) at the helm, have done just that and taken the Bard’s classic in a new direction, renaming it The Dream.

There have been some cuts made, some dialogue altered and some added. This was not to ‘dumb’ down Shakespeare, but to make it more achievable for younger players who have spent two and a half terms and a week of their holidays bringing The Dream to life. 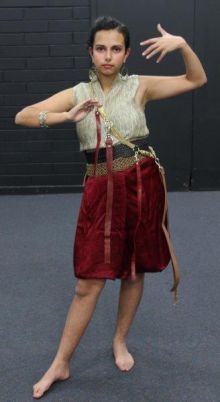 With a cast of 45 (7 backstage crew and 38 cast members, some playing on alternating performances), The Dream is The Heights School Players first production in a ‘real theatre’. The cast ranges from Year 6 to 12 and a reception student. Most the cast play the whole season, however there are 7 characters who alternate. This gives everyone who would like to act a chance to shine.

There are no auditions; any student who shows interest will be given a role. So, it is to their credit that Shakespeare’s words are spoken with such understanding. What is occasionally lost in clarity and volume is more than made up for in youthful enthusiasm for the play and the joy of performance.

Upon entering the auditorium, we are immediately transported to India with distant strains of the sitar and the faint waft of Indian spices. The set is simple but effective; rostra across the back, black curtains on each side with green, blue and orange lights spanning the back curtain.

The original characters from A Midsummer Night’s Dream are all there, but they are barefoot and wearing saris, leggings and kurtas with a sprinkling of western costume. Instead of a wood we find ourselves in a mysterious forest and instead of Ancient Athens we visit an Indian market.

Because of the alternating casts, it would be unfair of me to single out individual actors, so rather than do that I will highlight the scenes that stood out for me.

The opening market scene was a plethora of colour, song and polished Bollywood choreography featuring virtually the whole cast.

The scenes between the four lovers; Hermia, Helena, Lysander and Demetrius were skilfully handed, both in characterisation and pace. They can be thankless roles in the wrong hands, but certainly not in this case. 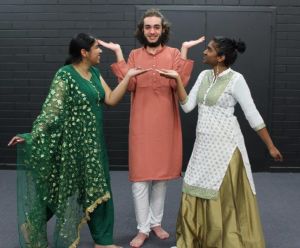 Oberon, Titania and Puck, with elaborate headdresses or hairstyles, take us to fairyland; Oberon with his authoritarian demeanour, Titania determined to have her way and Puck the joker/narrator of the piece.

As in many productions of A Midsummer Night’s Dream, the Rude Mechanicals steal the show. Their performance of Pyramus and Thisbe at the triple wedding is a riot of deliberate overacting. Every player had their moment to shine, and shine they do, much to the delight of the audience.

The triumphant wedding dance is a celebration of the journey these talented performers have led us on. Energetic, well drilled and using the stage space to the best advantage, it was highly entertaining.

It was a pleasure to watch a classic performed with youthful exuberance under the guidance of such dedicated teachers. It is nice to know Shakespeare will continue to live on thanks to the devotion of these young performers! 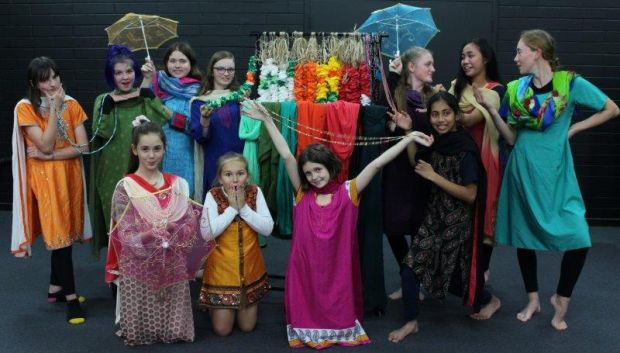