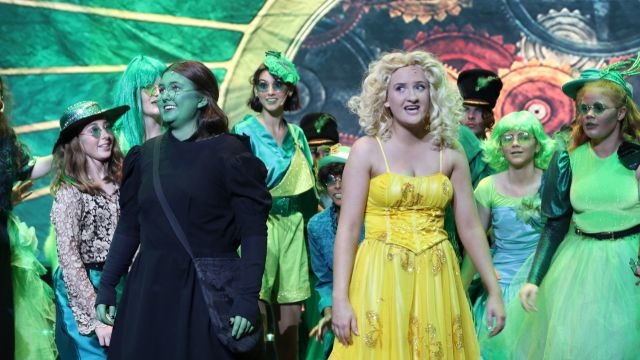 By Stephen Schwartz and Winnie Holzman, based on the novel by Gregory Maguire. Directed by Kylee Retallack. Mandurah Baptist College. Feb 21-27, 2021

A year after it was scheduled to open, Mandurah Baptist College’s Wicked finally took to the stage. Originally planned as tenth anniversary production, it had a smattering of former students in the cast – the number of graduands growing as the production now includes 2020 graduates as well. An enthusiastic and celebratory production that embraced the themes of perseverance and self-worth in the show – this incarnation of Wicked also had a fabulous community feel.

You can’t have a good production of Wicked without two amazing leading ladies, and MBC really delivered with a gorgeous Galinda and extraordinary Elphaba, who worked wonderfully together. Indi Thompson was a beautiful, self-assured Galinda, whose singing was excellent and who brought impressive comic skills to the character. To receive entrance applause and mid-song ovation in a school musical is very rare, but Christie McGarrity received and thoroughly deserved this honour, with an Elphaba that had depth and power and a voice that soared seemingly effortlessly with the demands of the role. Tahlia Aitkenhead brings “sophistification” and a delightful nasty streak to Madame Morrible, while former MBC Head Boy, RP van der Westhuizen, known in community theatre for playing “nice boy-next-door types” really surprised audiences in a top-notch performance as The Wizard, not as wonderful as he seems.

A large and enthusiastic ensemble provided support throughout. A wonderful example of the uniting effect of a show on a community, this was a beautiful example of community effort, resulting in a high quality production that was a joy to watch.