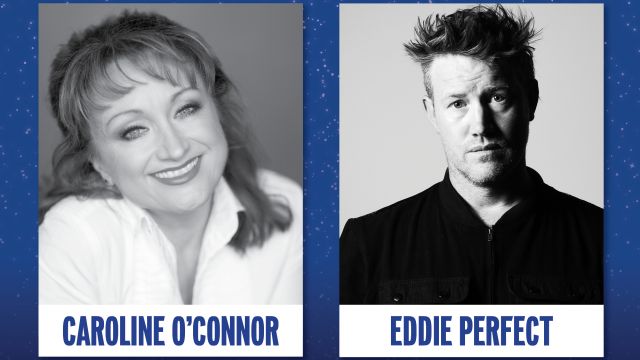 Dolly Parton and Producers John Frost for Crossroads Live, Suzanne Jones and Ambassador Theatre Group Productions the stars of the Australian premiere of 9 TO 5 THE MUSICAL, which will open in February at the Capitol Theatre, Sydney.

Caroline O’Connor will play busy-body Roz Keith, the administration assistant who is fiercely - and unrequitedly - in love with her boss Franklin Hart Jnr. Most recently seen in Melbourne Theatre Company’s Kiss of the Spiderwoman, Caroline has played lead roles on Broadway, in the West End, France and across Australia, including Chicago, Anything Goes, West Side Story, On The Town, Man of La Mancha, Bombshells, A Christmas Story and Anastasia to name just a few. Caroline also created the role of tango dancing Nini Legs in the Air in Baz Luhrmann’s Academy Award winning film Moulin Rouge.

Eddie Perfect will play the controlling boss Franklin Hart Jnr. Eddie is perhaps best known as all-round nice guy Mick Holland on Channel 10’s hit series Offspring, and has been seen in Kath and Kim, Spicks And Specks and numerous comedy shows including ABC TV’s Stand Up, The Melbourne Comedy Festival Gala and Good News Week. On stage Eddie performed in Keating! The Musical, Misanthropology, The Threepenny Opera and Shane Warne The Musical, which he wrote himself. In 2019, Eddie wrote the music and lyrics for the Broadway premiere of Beetlejuice, for which he was nominated for Best Original Score at the 2019 Tony Awards.

“I am so excited that Caroline and Eddie are joining the cast of 9 TO 5 in Australia,” said Dolly Parton. “I think they will be terrific as Ros and Franklin, two comic characters that audiences love to dislike.  The response to 9 TO 5 from around the world has been incredible so far. I can't wait for everyone down under to have a fun (and funny!) night out at 9 TO 5.”

“We’re thrilled that Caroline and Eddie, two of Australia’s top musical theatre talents, will return to the cast of 9 TO 5 in these wonderfully comic roles,” said the producers. “When Covid triggered the shutdown of theatres in March 2020, we were two weeks away from commencing rehearsals. Now that 9 TO 5 is back in business, it’s exciting to reveal that Caroline and Eddie are returning, and we look forward to announcing the rest of the cast shortly.”

In a further casting announcement, Marina Prior, Casey Donovan and Erin Clare have also been confirmed. Marina Prior will play Violet Newstead, a smart, sassy and efficient woman who has worked all her life at Consolidated Industries. She has all it takes to run the company but there is one small issue … her boss! Marina gained prominence as Cosette in the Australian premiere of Les Misérables and Christine Daae in The Phantom of the Opera, and has grown to become one of Australia’s most accomplished leading ladies, playing lead roles in The Sound of Music, Mary Poppins, The Secret Garden and countless other productions.

Casey Donovan will be Judy Bernly, a newly separated, never worked before young woman who finds more than just a job at Consolidated Industries. Casey shot to stardom after winning Australian Idol as a 16 year old in 2004, and has since become an audience favourite in concert and in musical theatre. Most recently she played Matron Mama Morton in the smash hit musical Chicago, and has performed in The Flower Children, The Sapphires, Rentand We Will Rock You.

Erin Clare will play Doralee Rhodes, a ‘don’t mess with me’ well-brought-up, bright and beautiful country gal. She may look like a push over but is anything but! Following her first starring role as Scaramouche in The Gordon Frost Organisation’s national tour of We Will Rock You, she has featured in Heathers the Musical, American Psycho, High Fidelity, American Idiot and Merrily We Roll Along.

“I am so excited that Marina, Casey and Erin will be playing Violet, Judy and Doralee alongside Caroline and Eddie in the Australian cast of 9 TO 5,” said Dolly Parton. “The response to 9 TO 5 from around the world has been incredible so far. I can't wait for everyone down under to have a fun (and funny!) night out at 9 TO 5.”

Producers John Frost for Crossroads Live Australia, Suzanne Jones and Ambassador Theatre Group Productions said, “We’re thrilled that Marina and Erin will return to the cast of 9 TO 5 to join Caroline and Eddie, and that the wonderful Casey Donovan will be alongside them. Now 9 TO 5 is back in business with a full cast, theatres booked and audiences clamouring to buy tickets. So put on your Saturday best and join us for the most fun you’ll have all year at 9 TO 5.”

The Australian premiere, secured exclusively for Sydney by the NSW Government through Destination NSW, will be a major drawcard for visitors to NSW.

Minister for Tourism Stuart Ayres said securing the Australian premiere of 9 TO 5 was a coup for Sydney and would give the state’s visitor economy a welcome boost by creating jobs and attracting visitors to the Harbour City after the ongoing challenges of COVID-19.

“The NSW visitor economy stands to benefit significantly from hosting Dolly Parton’s 9 TO 5 and we look forward to welcoming visitors to Sydney to see this upbeat, high-energy production come to life and bring some rhinestone sparkle to our stages,” Mr Ayres said. “The NSW Government is focused on investing in world-class events to deliver on our goal of becoming the premier visitor economy in the Asia Pacific, and securing this production for Sydney will bring welcome positivity as we emerge from the challenges of the pandemic.”

Tickets are on sale from Friday 29 October.

9 TO 5 features a score by Dolly Parton and a book by the movie’s original screenwriter Patricia Resnick, 9 TO 5 is the quintessential feel-good show for the times. Full of mischief, laughter and affection, it’s gold carat fun!

The Australian Government is supporting 9 TO 5 through its $200 million Restart Investment to Sustain and Expand (RISE) Fund, a program that is providing financial assistance to arts and entertainment companies affected by COVID-19.