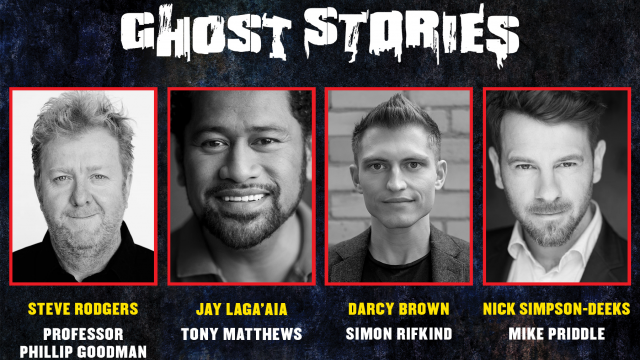 Realscape Productions has announced the Australian cast for Ghost Stories, ahead of the two-time Olivier Award nominee’s opening.

Speaking about the casting, producer at Realscape Productions, Amy Johnson, said, “Ghost Stories is thrilling and spine-tingling, and to immerse audiences in an emotional rollercoaster live on stage, you need an exceptionally talented cast. Steve, Jay, Darcy and Nick each bring an exciting depth to their roles that we cannot wait to see live on stage.”

Richard Carroll (Godspell, Once, Calamity Jane) will also join the Ghost Stories team as Associate Director for the Australian production.

Ghost Stories co-writer and director, Andy Nyman, said, “We couldn’t be more thrilled with the Australian cast and creative team for ‘Ghost Stories’. We can’t wait to see the dark fruits that they harvest!”

A fully sensory encounter, Ghost Stories is a twisted love-letter to horror, a supernatural edge-of-your-seat theatrical experience. Enter a nightmarish world, full of thrilling twists and turns, live on stage.

Little can be revealed about the production’s plot in order to keep the audience on edge, but ticketholders are promised they will be both roaring with laughter and jumping out of their seats.

Ghost Stories will play at Melbourne’s Athenaeum Theatre from 16 September to 22 October, and will then move to Adelaide’s Dunstan Playhouse from 7 to 31 December 2022.

GHOST STORIES is now on sale, with tickets from $44.95 + booking fee. For those brave enough to book, visit ghoststoriestheshow.com.au.

WARNING
Please be advised that Ghost Stories contains moments of extreme shock and tension. The play is unsuitable for anyone under the age of fifteen. We strongly advise those of a nervous disposition to think very seriously before attending.