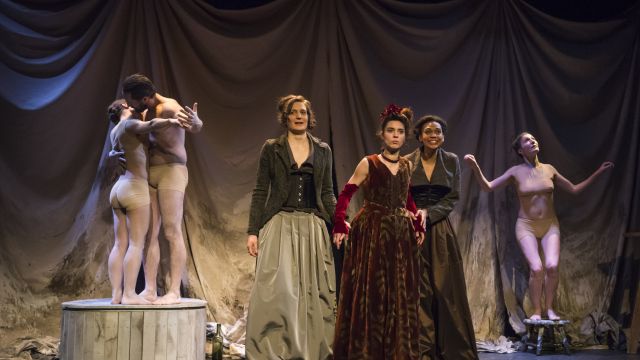 Claudel is a reimagining of the story of one of the world’s greatest and most misunderstood sculptors, Camille Claudel and her complex relationship with legendary artist, Auguste Rodin.

Claudel is a combination of narrative, dance, sculpture and music. It will have its Australian premiere, from 23 April at The Playhouse, Sydney Opera House.

Written and directed by acclaimed playwright Wendy Beckett and Choreographed by the internationally celebrated Meryl Tankard, Claudel explores the life of the highly talented and rebellious young sculptor Camille Claudel.  Set in 1880s Paris, this haunting drama unflinchingly questions the notions of genius versus madness and the consequences for those who chose lives that are deemed too different for society to tolerate.

Claudel, directed by Wendy Beckett with choreography by Meryl Tankard, first premiered in March 2018 at the historic Athénée Theatre in Paris, France followed by a limited season at Festival OFF d’Avignon.

Wendy Beckett has written over twenty-five plays and directed over forty.  She is also the author of biographies, books, academic studies and radio plays written for the Australian Broadcasting Corporation.  A selection of her books and writings can be found among the collections of the National Library of Australia.  For the last 10 years she has been creating, directing and producing her own pieces across the world.

Meryl Tankard has forged a stellar career as a director and choreographer.  She has created ballet, opera and music and dance theatre for the main stages of Australia, France, Germany, the UK and USA.  She was principal artist with the renowned Pina Bausch Wuppertal Dance Theatre and Artistic Director of Australian Dance Theatre for six years.  More recently Meryl has focused on film and screen culture.  Scenic and graphic design by Halcyon Pratt.