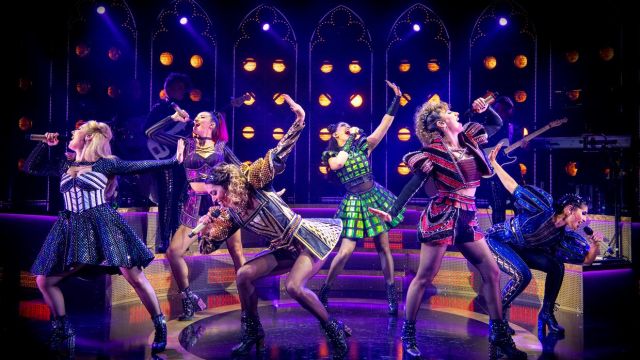 The Sydney Opera House has announced the return of SIX the Musical by Toby Marlow and Lucy Moss, bringing much-needed feel-good live performance back to the stage in line with the easing of restrictions in NSW. Following its sold-out season in early 2020, the witty, pop-fuelled musical will return to the Opera House Studio from December 19, 2021, kicking off the 2021/22 national tour after victorious openings in the West End and on Broadway. Tickets will go on sale on Friday 8 October.

The new and returning cast members will reclaim their bejewelled microphones, a remixing of the history of the six wives of Henry VIII. Inspired by the canon of music divas Adele, Lily Allen and Ariana Grande, and with support from the SIX band Ladies in Waiting, the women transform from Tudor Queens to Pop Princesses as they tell their rebellious tales.

Sydney Opera House Head of Contemporary Performance, Ebony Bott, says: “We’re thrilled to be welcoming audiences back to the House for an evening of pure, feel-good entertainment, a welcomed remedy after another challenging period. The powerful and dynamic performances by the next generation of leading Australian female talent is sure to inspire and uplift audiences. By smashing the archetypal musical to reimagine the HERstories of the six wives of Henry VIII, this powerhouse production is the embodiment of female empowerment, and so aptly reflects the growing voices of young women.”
Reprising their crowns from the sold-out Opera House season are Kala Gare (Bright Star, RENT) as the rebellious Anne Boleyn, Loren Hunter (Strictly Ballroom the Musical, King Kong the Musical) as the loyal Jane Seymour, Kiana Daniele (Boy from Oz, Dirty Dancing) as independent Anna of Cleves and Vidya Makan (American Idiot, Romeo and Juliet) as the empowering Catherine Parr. Karis Oka (FANGIRLS) and Shannen Alyce Quan (The Gathering) are returning as Swings.

New to the Australian cast is Phoenix Jackson Mendoza (American Idiot, Charlie and the Chocolate Factory) as pious Catherine of Aragon and Chelsea Dawson (Shrek The Musical, Les Misérables) as misunderstood Katherine Howard. Taking on the roles of dance captain and swing is Chiara Assetta (So You Think You Can Dance).

SIX was co-written by Toby Marlow and Lucy Moss as a student production initially staged in a 100-seat room at Sweet Venue during the 2017 Edinburgh Fringe Festival. SIX has continued its reign and become a global phenomenon, with its Studio Album exceeding 200 million streams worldwide, second only to Hamilton.

SIX was nominated for five Olivier Awards including Best New Musical and won the BBC Radio 2 Audience Award for Best Musical at the Whatsonstage Awards. As the pandemic struck, SIX was playing to sold-out houses in London’s West End, across the UK and Australia, and had commenced previews on Broadway. As stages around the world are lighting up again, SIX is well and truly reinstating its status of global phenomenon.

SIX the Musical has book, lyrics and music by Toby Marlow and Lucy Moss. It is directed by Lucy Moss and Jamie Armitage and choreographed by Carrie-Anne Ingrouille. Set Design is by Emma Bailey, Costume Design is by Gabriella Slade, Lighting Design is by Tim Deiling and Sound Design is by Paul Gatehouse. The Orchestrator is Tom Curran and Musical Supervisor is Joe Beighton.

As the Opera House prepares to reopen its venues and theatres, the health, safety and wellbeing of artists, audiences, visitors and staff remains its top priority. At all times, Sydney Opera House COVID-safe operations and conditions of entry will comply with the NSW Public Health orders in place at the time of the event. Sydney Opera House ticketholders are encouraged to visit the plan your visit page prior to their performance for the most up-to-date information.