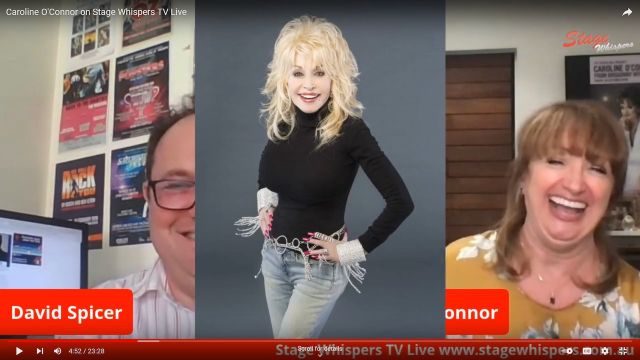 Since the last edition of this magazine, Stage Whispers has acquired a new toy that I have enjoyed playing with. It is software called Streamyard, which is a bit like Zoom but is tailored to broadcast interviews.

When I worked at the ABC in the good old days there would be a room full of people – camera operators, mixers, switchers, etc for a live broadcast to go to air. Now I can do the lot from my laptop, with talent in another state beamed live onto Facebook and YouTube.

Caroline O’Connor was one of my guests on Stage Whispers TV live, chatting from her special room in her house in Queensland. On the shelf behind her were Helpmann Awards and other gongs.

We spoke about her being cast in Nine to Five the Musical and reminisced about her career. At one point we were able to ‘look around’ Dolly Parton, as you can see from the image above.

Caroline was very excited at the prospect of getting back on stage after two years.

“Sadly 9 to 5 the Musical was cancelled (in 2020), two weeks before rehearsals began. It is thrilling that the producers have not given up and will be opening at the Capitol Theatre in February,” she said.

It has been a very tough time for performers.

“I haven’t coped. I was terribly sad. At first, I was hanging in there but as it went on longer, I got more depressed.

“Now I am scared to get excited in case someone says it is not going to happen. But I think it will. Fingers crossed.” 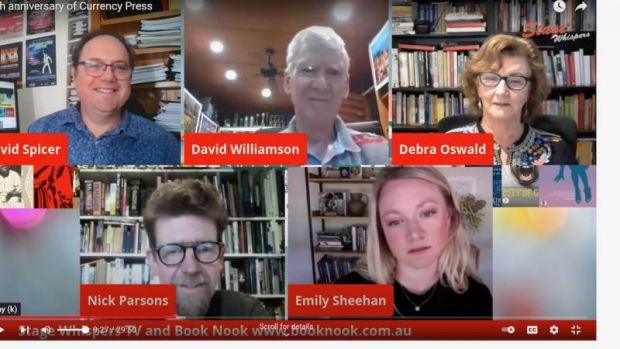 My other major Stage Whispers live broadcast took place on the 50th anniversary of Currency Press. The publishing house was founded in 1971 by theatre critic Katherine Brisbane and her husband, Drama academic Dr Philip Parsons. Today it has more than 400 plays and reference works in print.

The popularity of the works of David Williamson was a major factor in the company’s commercial viability. The publication of his play The Removalists was credited by Currency Press chairman Nick Parsons with keeping the company afloat in the early years.

So, it was a coup to have the big man on the program alongside playwrights Debra Oswald and Emily Sheehan.

“As I have said often to my Currency editors, I never quite believe that one of my plays has happened until I hold my Currency Press edition.”

Debra Oswald said, “I started going to the theatre when I was 11 or 12 and after that I fell in love with plays. I used to go to Parramatta Council and beg the librarian to buy more (Currency Press) publications.

“(Reading them) made me believe that it was possible to be a playwright in Australia.”

The subjects covered in the Q and A included whether many people read plays for pleasure?

The consensus was that unlike novels, plays are not a popular literature, but (unsurprisingly) the playwrights believe they should be.

“I do read plays for pleasure. (I read them) to get better at my craft, but they are also a fun way to pass the time. They are short reads and it might only take an hour on the couch,” said Emily Sheehan.

“I enjoy reading them. The feedback I get from classroom teachers is that my plays came alive when the class started acting them out - as soon as students got them into their own mouths.”

Mouths feeding playwrights has a ring to it!