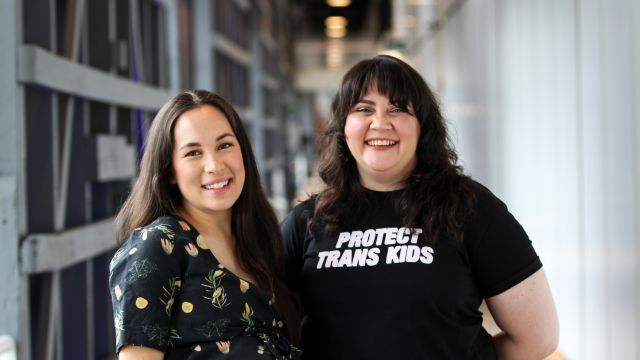 Sydney Theatre Company has announced Shari Sebbens and Courtney Stewart will join their existing Resident Artists in 2021. Shari (Black is the New White, The Bleeding Tree) has been appointed Resident Director and Courtney (White Pearl, Hamlet: Prince of Skidmark) is the company’s new Richard Wherrett Fellow - a career pathway opportunity for emerging directors.

STC’s Resident Artist program champions new writing and diverse voices, aiming to establish a collaborative environment in which artistic excellence can be achieved. In 2021, STC Artistic Director, Kip Williams will also be launching a new Resident Artist initiative - the Design Associate Program - which will be an annual opportunity for three Aboriginal and Torres Strait Islander and/or CALD (Culturally and Linguistically Diverse) peoples to be supported and developed in the area of theatre design.

Having forged his own career at STC as a Resident Artist, Williams said he was thrilled to welcome aboard these two incredible creatives to play a central role in the day-to-day artistic life of STC.

“I am so excited that Shari is continuing her long affiliation with STC in becoming our new Resident Director," Williams said. "It has been a pleasure and a privilege having Shari as our Richard Wherrett Fellow these past two years, and I look forward to seeing her continue to develop and flourish as an emerging directing talent in her new role. Her work on STC Virtual and her wonderful production of Superheroes at Griffin (one of the first shows to open post-lockdown) are testaments to her immense talent. Though the circumstances of 2020 meant Shari was unable to make her STC directing debut last year, I cannot wait for the wonderful projects she will direct for us in 2021.”

“I am also thrilled to announce that Courtney is joining STC’s Artistic Team as our new Richard Wherret Fellow. Her wealth of experience in many aspects of theatre from acting, directing, dramaturgy and her wonderful work as a part of the Contemporary Asian Australian Performance (CAAP) Director’s Initiative make her the perfect choice. I am particularly excited to collaborate with Courtney in her role as Dramaturg on my upcoming production of Playing Beatie Bow by Kate Mulvany. All of us at STC can’t wait to watch Courtney’s formidable talent develop even further.”

Among the many exciting projects our new Resident Director Shari Sebbens has on the cards for 2021 is a new television series called The Whole Table, a co-production between STC and NITV set to air on January 20. Shari will host the ground-breaking current affairs show that will feature a regular panel of First Nations artists and explore a range of issues that impact Indigenous people both in Australia and abroad.

Shari is a proud Bardi, Jabirr-Jabirr woman born and raised in Darwin who studied Aboriginal Theatre at WAAPA and acting at NIDA, graduating in 2009. After a successful stint as a performer on stage and screen, including in Nakkiah Lui’s Black is the New White directed by Paige Rattray (2017 and 2018), Shari decided to make the leap into directing and in 2019 was appointed the STC Richard Wherrett Fellow.

Shari was set to helm her first production, a re-staging of Deborah Mailman and Wesley Enoch’s seminal Indigenous play The 7 Stages of Grieving, in 2020 before COVID restrictions brought those plans to a halt. In 2021, Shari will be Assistant Director to Wesley Enoch on Branden Jacob Jenkins' Appropriate before finally making her STC directing debut later in the year. Details will be announced in March for Act Two, the second release of plays in STC’s 2021 season, which will feature two productions directed by Shari.

“It is an incredible honour to be promoted to Resident Director for a company that is constantly pushing the boundaries of what constitutes theatre and not scared to engage in the necessary conversations and actions required for cultural growth," Shari said.

"I’ve worked with Sydney Theatre Company as both an actor and the Richard Wherrett Fellow in the last few years and I’m excited to continue my creative development under the company's invaluable guidance. As a Bardi and Jabirr Jabirr artist I am also proud of the choices STC continues to make in producing Indigenous work. In promoting more Indigenous voices to leading cultural positions, STC recognises the importance of diversity and are investing in the future of Indigenous storytelling on our stages. I'm excited to begin the year under the guidance of previous resident director and inspiration of mine, Wesley Enoch, as he leads us through Appropriate and onto The Whole Table. These projects will kickstart our year and incite some thrilling and necessary conversation that I know will carry on throughout the season and hopefully our lives."

Courtney Stewart is an actor, director, dancer and teacher who has a long-standing creative relationship with STC. She has worked on a number of productions and developments of new Australian work with the company, including Hamlet: Prince of Skidmark and Australian Graffiti, and has been part of the company's CAAP Directors Initiative. Courtney also worked as a Dramaturg on the production of White Pearl for STC in 2019.

"My relationship with STC has been one of the most meaningful professional relationships with a company I have had to date, and I couldn’t be more excited to continue this relationship as the next Richard Wherrett Fellow," Courtney said.

"This opportunity will give me the resources and space to further develop my skills in the areas of creative leadership, directing and dramaturgical processes. The new commitments the company has made to increasing equity in the area of cultural representation are incredibly important and this is something I am fiercely committed to. I am dedicated to the development of new Australian work, and want to be involved in diversifying the practices and the artists who are responsible for ushering these new stories to the stage. It’s an absolute honour to be invited to the table at a time when the industry as a whole is breaking open important discussions and re-evaluating processes to strive towards a more equitable future for all artists."