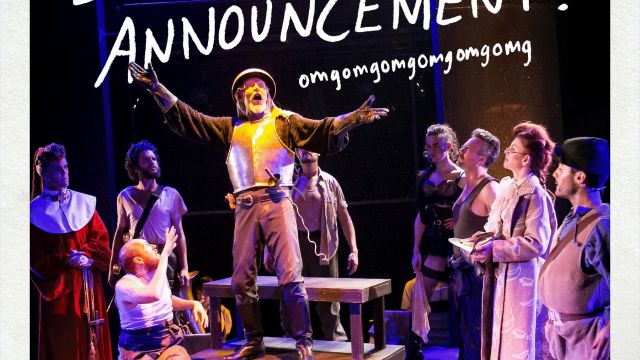 Eighty-two private and public arts organisations across the country have been awarded  $40 million under the fourth batch of grants from the $200 million Restart Investment to Sustain and Expand (RISE) Fund.

Amongst the notable grants for live theatre are the Squabbalogic Independent Music Theatre Company being granted $835,000 to develop and tour three new Australian works, $900,000 for the national tour of the musical Six,  $180,000 for the Theatre Royal in Hobart to stage The Rocky Horror Show,  $690,000 for NIDA, and $460,000 for Sydney's Seymour Centre's artistic program.

Here is the facebook reaction from Squabbalogic:  which is the producing company of the soon to be seen Australian musical The Dismissal.

The (omgosh!?) $850,000 we receive will see us develop at least THREE top-secret-yet-to-be-announced new Australian works as part of a national touring network… and a few other surprises we can't wait to share with everyone. Seriously hold onto your butts, folks!"

Minister for Communications, Urban Infrastructure, Cities and the Arts, the Hon Paul Fletcher MP, said this $40 million in funding is especially important during such a difficult period for the sector.

“Demand for RISE funding has been significant since it opened last year. The latest funding will be allocated immediately to create more than 56,000 employment opportunities across the country,” Minister Fletcher said.

“RISE has been critical in supporting Australia’s live performance venues and events during an unprecedented time of widespread disruption from the pandemic.”

“RISE is rebuilding confidence and assisting arts and entertainment businesses to provide audiences with cultural and creative experiences nationwide. The strong demand for the program is indicative of the importance of this investment,” Ms Macgregor said.

“The funding is also invaluable for the broader economy, generating employment and economic activity for other industries such as hospitality and tourism.”

In this new batch of projects, the RISE Fund is supporting festivals such as the Adelaide Fringe, and the Sounds West Festival to implement COVID-safe measures and infrastructure including signage, tracking and hand sanitiser stations.

Almost one third of the projects funded to date have been provided funding for COVID safe measures and infrastructure.

Australia’s premier Blues festival Bluesfest will receive $2.4 million, the highest amount of RISE funding ever delivered, to reignite the festival with an all Australian line-up following consecutive COVID-19 cancellations in 2020 and 2021.

In March 2020, the Federal Government announced the RISE Fund would receive an extra $125 million, building on an original commitment of $75 million.