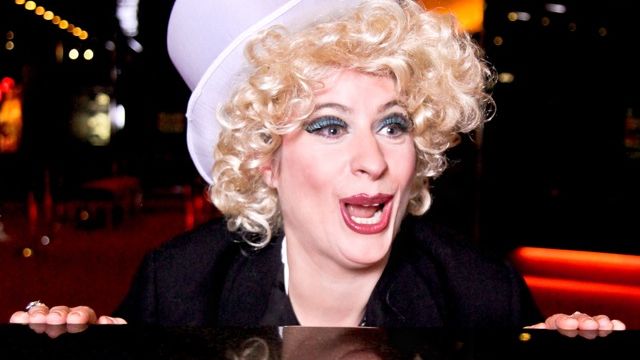 Rosie stars as Gracie, a cloak room attendant who longs for a better life and spends her time imagining what it would be like to wear other people’s coats.

Alone in the cloakroom, Gracie is surrounded by the magnificent coats and luggage of the people who leave the items there. The coats and bags represent the paper-thin façade of people such as politicians, as well as secretive lovers.

A fantastic journey unfolds in Rosie’s imagination. She lavishes her fancy trying on garments, while the many characters in her mind uncloak and unpack the rest. Meet Myrtle, the little girl, Victoria Deck’em, Fanny Slutzkin and the Hooker Slappers, together with glamorous Miss Divina, Opera Diva and Cha-Cha Champion of the world.

Throughout the show original songs, parodies and covers are delivered by Rodiadis, who has a wide background as a comedian, actor, dancer and vocalist, including in the chorus of Melbourne City Opera.

In her script, which she originally penned in 2013 for the Melbourne Fringe, Rodiadis draws on her own experiences as an usher. She tackles taboos, solitary and social pretence and overlays her own inimitable style on each of her characters.

Past reviews have been great, with Australian Stage describing Rodiadis as ‘... a comedy natural, with great energy, a terrific stage presence and a muscular sense of theatricality.’

Put on the Ritz and strap on your bits and get along to the Bakehouse Theatre to see this piece of comedic cabaret. 18+ mature audience only.