The Wharf Revue Team Open a Can Of Worms 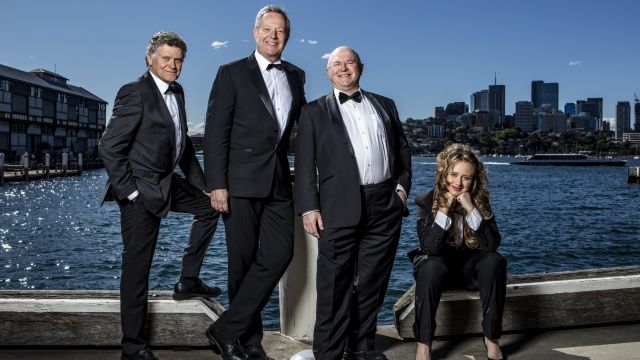 The Wharf Revue returns in its new annual iteration titled CAN OF WORMS, playing at The Seymour Centre from 23 November and produced by Soft Tread, the company that produced Jonathan Biggins’ The Gospel According to Paul.

The Wharf Revue team of Jonathan Biggins, Drew Forsythe and Phillip Scott is back with Amanda Bishop. They have baited their hooks and are opening another can of worms on a new wharf, to trawl for every political flathead, groper or yellowtail that floats into view. Then the catch of the day will be filleted, battered and grilled and served in a spicy satire sauce with a topical garnish. (Chips extra).

“The Wharf Revue is setting out to sea again on a journey of satirical discovery - but this time under its own steam,” said the intrepid trio of Biggins, Forsythe and Scott. “All hands on deck for a daring adventure as we navigate the dire Straits of Covid, sail round the treacherous Horn of Scomo, steer well clear of the empty Cape of Pauline, only to be becalmed in the Nationals Bermuda Jacket Triangle before stumbling across a New World, filled with hope and promise! Or not.”

Join the regular crew of creatives as they bravely voyage to the bottom of the barrel.

“So hysterical that twice I was brought to tears – an activity usually reserved for funerals, Puccini and hitting my thumb with a hammer.”  Sydney Morning Herald

THE WHARF REVUE: CAN OF WORMS