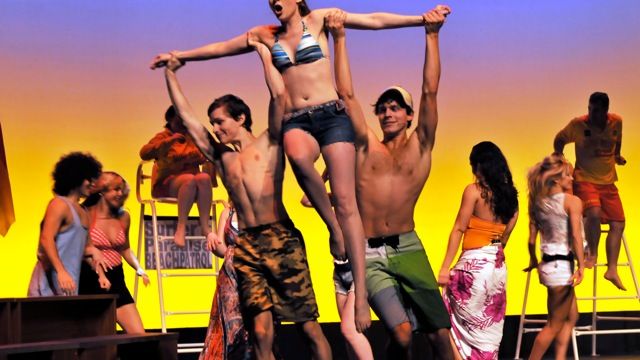 It attracted some of the most scathing reviews ever seen on the Sydney Theatre scene, including

“If Basil Fawlty produced a Musical it would look like this.”

Michael Orland gives all the grisly details behind Beaudy.

Beaudy (the musical) is based on music I wrote over a 35-year period. After completing it a couple of years ago, I spent a year hawking it ‘round before realising its only chance was if I staged it myself.  My wonderfully supportive wife and I estimated that we could put it on as a pro-am show for a daunting outlay of $30,000. With careful management, we could hope for a similar return, achieving the great dream of breaking even. We gathered a team we had worked with before, and all concluded it was do-able.

The next step was securing a local venue, shared by a few local theatre groups, happy to work solely on a percentage of ticket sales. We did this on the strength of several handshakes. We then booked the orchestra, our leads, rehearsal space, and key personnel, for a season in July 2010. The bombshell came in February when our venue casually announced they would be closed in July, so would we mind rescheduling for August?

This was impossible, but at the time The Parade Theatre (N.I.D.A) had just been told that The Drowsy Chaperone would not be coming to Sydney, so they had a vacancy. There was no presenting deal on offer. We were welcome to hire the theatre, on the condition that everyone we employed was contracted and paid at professional MEAA rates. There was to be no pro-am or profit share. 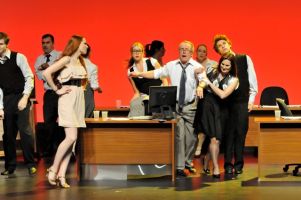 Interest grew, culminating inBeaudy’s inclusion in Hobart’s 2010 Festival Of Broadway workshop. Finalising the work owed much to the input of Stephen Schwartz and ASCAP. With the ensuing media coverage, much became expected from my “pleasant night at the theatre”.

I must have done something right. By week three of Beaudy’s run at the Parade Theatre, the backstage noticeboard was crammed full of congratulatory letters and emails, many from theatre industry notables. They make interesting reading on Beaudy’s Facebook page.

All strangely at odds with the most scathing reviews I’ve ever seen for a new musical. And all from the same night: our premiere.  So what went wrong?

Many thought I was nuts taking on sound duties in addition to the 35 hats I was already wearing. But that was the financial reality for Mr and Mrs Suburbs. Anyone who has hired my audio services within the last five years knows I use a digital console set up at side of stage with all functions remote controlled by a laptop at the mix position. Despite years of flawless operation, this laptop repeatedly froze during our premiere. I lost control of the 17 wireless mic systems.

The cast would walk offstage saying things like “Oh crap, I sang that flat” or much worse and the audience would hear everything.

The lighting operator, a computer wiz, offers help each time, but this only results in lighting miscues. Sets were meant to be moved in blackout. Instead there was full stage wash while stagehands froze, unsure whether to proceed.

A wheel snaps off one of the set pieces during the confusion. As David Spicer wrote in Stage Whispers “just when you thought it couldn’t get any worse, it did so, and then more”.

Towards the end of act two, I abandoned the laptop and finished mixing directly from the console at the side of stage. This was in an area so well isolated, I was unaware how loud I was making it.

Many in the audience walked out.

Our talented MD bravely stretched with playoffs, etc., during the debacle.  I was shocked to find the night had dragged almost three hours from start to dismal finish.

Our lighting operator took the laptop home with him and found a virus onboard, so nasty it required a fresh Windows install. After that the system worked like a dream for all remaining shows, which were well received. After the opening night reviews, those expecting the Musical equivalent to “Plan 9 From Outer Space” were surprised, even puzzled.

And, outside a handful of stone-faced critics, everyone I spoke to before, during, and since Beaudy loved the music. Always our prime motivation.

An established theatre company has since taken onBeaudy for a future performance, with real interest from other groups. We are, of course, unable to sell the DVD we made during one of the performances. But we continue to include a free copy to anyone buying a souvenir programme for $7 (inc postage)

Our original estimate was close. We were able to generate $30,000 in sales. But we didn’t quite break even. We lost $350,000. It will take us seven years to pay for. Still, we occupied a theatre that would have been otherwise “dark”, kept 40 professionals in employment, and, once past our unfortunate opening, entertained 14 audiences. I understand and accept the initial bad reviews. As one critic told me: ”Oh, boo hoo. This isn’t high school, Michael…”

What I don’t understand is online chatter from people who admit they never saw Beaudy saying what a shame that a more deserving work wasn’t chosen for staging. Would someone please explain “chosen”?