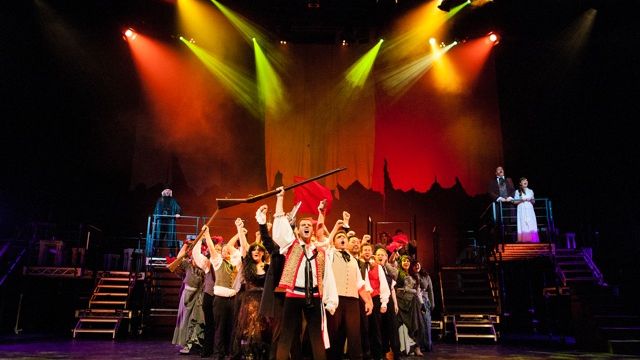 When Hal Leonard announced last year that Les Misérables was being made available again to non-professionals there was great excitement in the ranks.

The Willoughby Theatre Company was one of the first half dozen to be given the rights way back in 1992, so it was a huge nostalgia trip for us to apply for this show again exactly 20 years since we last presented it in the cramped Bailey Hall at Chatswood.

Now blessed with a stunning performance space in The Concourse at Chatswood, WTC was keen to expand this time-honoured piece of musical history onto a stage that would reflect the grandeur of the piece.

By October 2012 we were given the ‘nod’ that the show was ours, just a few months before the movie featuring Hugh Jackman in the lead role was released. As it happens Hugh Jackman was once a member the Willoughby Musical Society, as our company was called at the time. How’s that for a coincidence? 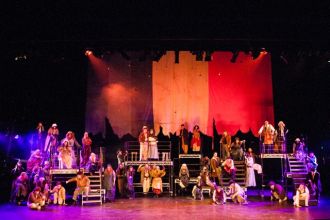 As Director and former 1992-93 principal (Monsieur Thenardier) I was passionate about the show but definitely did not want to just reproduce what has been the normal staging of this show since it first appeared in 1987.

How could we make it fresh and stimulating for the audience (many of whom were also Les Mis tragics) and the cast?

Solution? Megadeck! And a desire to bring Les Mis back to the streets of 1832 Paris with people living in the shoddy narrow houses of the period and bringing the story to a scale that the audience could accept. How did those students build that amazing monster of a barricade with its hydraulic overload and skyscraper dimensions?

The concept was to have a moveable megadeck stacks on casters that could move about the stage and form any configuration of street, building or tavern possible. 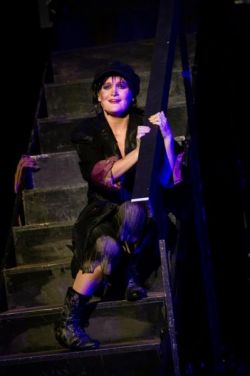 These ‘pods’ as we called them (seven in total, different heights and designs) were choreographed to be moved on musical cues by the cast to provide a  seamless transition from one scene to another. Only in two scenes, the death of Fantine and the suicide of Javert, were stage crew involved and then they were unseen by the audience.

Audition time dawned in December with 296 people booked in, and a waiting list of another 20 people. Who said Les Mis wasn’t popular? After five nights and one complete weekend of hearing ‘On My Own’, we settled on a cast of 55 amazing people including 5 children. That meant that 240 missed out!

We were blessed with a strong principal cast.

From a production point of view, my concept of a 17 by 10 metre back projection screen proved to be out of the question and thankfully Simon Greer (assistant scenic designer) came up with the idea of making a suitably old, torn and faded giant French Flag. It proved to be a stunning focal point for the whole show, representing the downfall of the French nation at the time.

In addition, the costume design under Joy Sweeney’s creative juices, made an additional statement as costumes did not conform to, and in some cases (Eponine and Javert) made a complete break from, tradition. The audiences loved the sharp non-conventional approach (even the prostitutes looked different), saying it added to the overall ‘modern’ approach to the show.

Once the set design had changed to include the French flag we then decided to integrate the costumes into this concept.

All the costumes were in shades of blue, red or dirty white (grey). To these we added different shades of grey, black and maroon, but kept away from the sepia/brown colours which are traditionally used in Les Mis. This then flowed on to the lighting, which also departed from the traditional to fit with the costume colours. 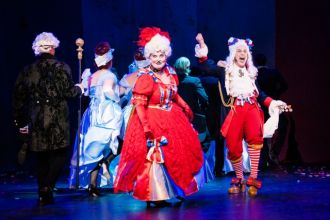 Eponine was dressed “period/punk” with a black lace torn dress lined with purple, black hair and heavy eye make-up. This gave a modern/period crossover look. Javert was taken out of the traditional costume and put into a long leather coat, which echoed shades of German “SS”, boots and top hat.  Cosette’s costumes were changed and the traditional black dress was eliminated. “A Heart Full of Love” was done “a la” Romeo and Juliet high on a balcony with Cosette in a nightie.

Now believe me, we did not change one note or lyric of the show but focused on the characters and the period with emphasis on making the audience wait to see what the next scene would look like.

How did we go? A 96% occupancy made us happy and the standing ovations at nearly every performance convinced us that we had made the right choices in production, scenery, costumes, choreography and staging.

Vocally the chorus were exceptional, while the orchestra under Mark Pigot was lush and full. The whole experience was absolutely rewarding and the principals - perfect. 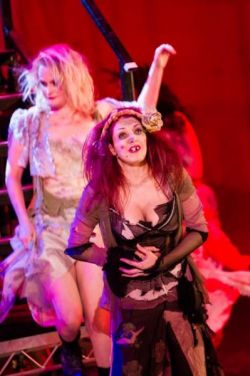 I can only stand back and say thankyou to our production team (Janina Hamerlok (musical staging), Neil Shotter(design), Tim Swinn (Stage Manager) Sean Clarke (Lighting) and the technical team from Century Venues (The Concourse) for a job very well done.

The comedy duo of Philip Youngman and Emily Talbot as the Thenardiers was awesome.