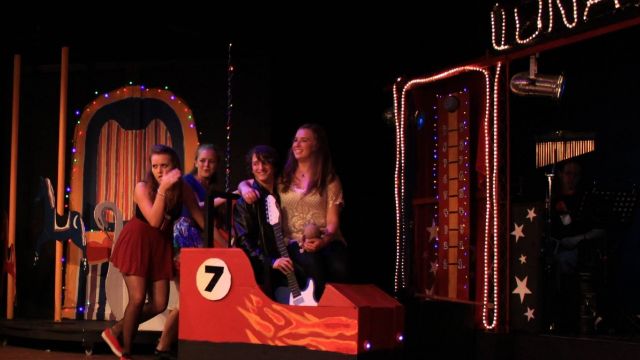 Director Ian Wesley took up the challenge of staging a new musical. It was a gamble but it paid off.

NUCMS (Normanhurst Uniting Church Musical Society) was born in 1975. Like many musical theatre groups, it had humble beginnings and humble aims - to entertain the local community, and raise money for local charities and the local church. After performing in many different venues, we moved into our permanent home – a hall in Sydney’s north-west - in 1997. We are fortunate to be able to rehearse and perform in the same venue. It is a small, low tech and heavily used space but the challenges are part of the joy of community theatre. 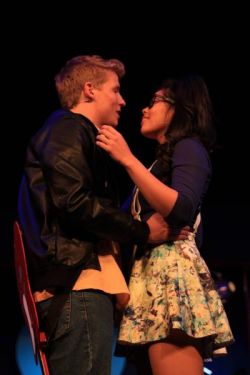 Over the years NUCMS has performed a wide range of shows – everything from Gilbert & Sullivan operas through Broadway classics such as The Sound of Music to modern shows like Into the Woods and Urinetown. A show has to fit into our space, we have to be able to cast it, and it has to appeal to an audience. Then there are the budget considerations and technical requirements. Last but not least, we might need to consider whether the show is suitable for performing in a church (our recent production of Blood Brothers required some delicate negotiation).

I was looking for a musical version of Dream, and considered a number of versions including one by Charles Hart and Howard Goodall. I found this version and after listening to the music and talking to the composer, I submitted a proposal to NUCMS.

I felt that the show had potential and was something unusual that would be a change from the usual repertoire of music theatre. I also hoped we would entice new performers and a new audience.

The Concept and Design

The original script sets the show in New York, specifically the garden of the Mayor’s Mansion and Central Park. Very early on the production team decided that we wanted to give the show a Sydney setting. We thought that Luna Park offered lots of opportunities for the central setting of the show, and we picked Kirribilli House as the nearest Sydney equivalent for the Mayor’s House. Cath Hale turned my sketchy ideas into a stage design featuring a carousel, a tintamareski and lots of flashing lights.

It is interesting how the seemingly simplest of ideas can take the longest to put into practice, particularly when the technical facilities are basic. I had an idea that I wanted to recreate the show logo on stage (Puck in silhouette against a giant moon). I also wanted the moon to rise at the appropriate point in the music. A number of versions of the mechanism failed, but eventually the construction team worked their magic and solved the problem with a piece of cardboard and several lengths of rope. 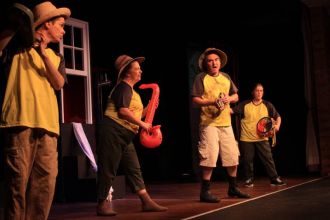 The show itself is a bit of a Curate’s Egg. Originally conceived as a sung-through musical, it was eventually first performed with dialogue replacing some of the musical numbers. Every subsequent production has resulted in more changes, and we had permission from the writer to make further alterations. In fact George Griggs positively encouraged us to make whatever changes we wanted.

Rather unusually, there is no formal musical scoring. The music supplied is just a lead sheet (vocal line with guitar chords), so Music Director Isaac Reefman, the cast and the band had plenty of opportunity to put their own interpretation on the music.

Choreographer and co-director Mel Hogan worked her magic on the dances, coping admirably with talent ranging from experienced dancers through to those of the “two left feet” school of dance.

We had the usual problems of sickness and unavoidable absence, which meant that we did not have a full cast for the Dress Rehearsals, but the commitment of the cast meant that we overcame these problems. 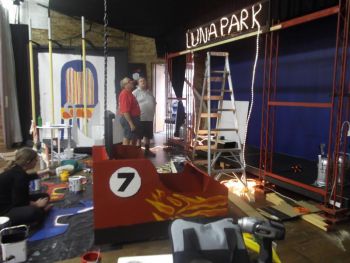 The audiences were smaller than we hoped, but still big enough to cover the costs of the show. Our audiences enjoyed the performances, and half of the cast were new to us.

Taking on a new show is always exciting. When the show is still in a creative flux, it is not something for the faint hearted. This production has been a wonderfully creative experience. It is not every team that gets to work with the creator of a musical, and whilst this show has its structural problems, it does have potential, and is great fun to perform.

Music and Lyrics by George Griggs