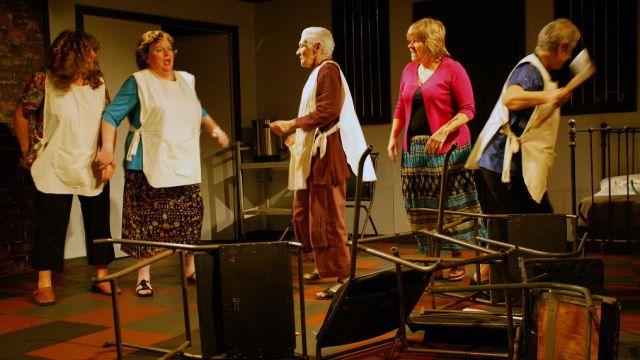 Until the 1970s, rebellious or high-spirited teenagers chafed under the threat of being sent to a home for delinquents. For girls, crimes and misdemeanours - playing truant, running off with a boyfriend or mixing with the wrong crowd - could result in a charge of being in moral danger. Young women from dysfunctional families, which usually meant those with alcoholic parents, were also put away.

Thousands between the ages of twelve and eighteen were sentenced and carried the shame of being branded a home girl.
The GTS, better known as the Parramatta Girls Home, was closed down in 1974. Its conditions were widely recognized as being even harsher than those adult prisoners endured. Girls frequently rioted because of the punitive, Borstal-like mentality, whereby they were kept under surveillance at all times. They scrubbed floors for hours. By the sixties, sentences were usually six to nine months, but in earlier times a girl could spend all her teenage years in the facility.
Sexual and psychological abuse and emotional neglect were commonplace.

Drugs such as Valium and Largactil were used to subdue difficult girls, who were frequently placed in isolation, or solitary confinement, for long periods, barefoot, wearing a sack and fed only bread and water.
* Rosalie Higson Journalist The Australian March 2007.

Alana Valentine's play Parramatta Girls came about after she heard about the GTS on an ABC television programme in 2003. After hearing the testimonies of the women who had survived incarceration in the Parramatta Girls School, Alana held two public readings, which led to her writing the play.
Parramatta Girls encompasses the portrayal of eight women who have come back to a reunion at the GTS Parramatta, some 40 years after they were first incarcerated. It is a dramatization of the reunion and includes song and story telling and shows the determination of the women who survived in the face of hardship and inequality.

WHY I CHOSE THIS PLAY.

I felt compelled to direct this play, as I am a relinquishing mother.
Even though I myself was not placed in a home because I was pregnant (as some of the inmates at Parramatta Girls Home were) I know many women who were placed in care. It is very important that the history of women being incarcerated in places like the Parramatta Girls Home is documented and available to the general public.

Casting
Casting appropriate actors was a huge challenge for Parramatta Girls.
Ideally I wanted at least one but would have liked up to 4 indigenous women. After at least a hundred phone calls, contact with indigenous agencies and a plethora of emails, I had to finally admit defeat. I was told that because we were outside of the CBD and did not pay our actors that we would be unsuccessful in our efforts to cast indigenous women. What a shame. Parramatta Girls would be the perfect play to showcase any actor’s ability.

Set
We decided we needed an austere, sterile set, which carried the action between present time and the early 1970's. Blue flip down chairs, an old urn and tea trolley, an iron bed and an old rusty copper completed any scene depicting the past. Complimenting the set was the floor, designed and painted by Chris to look like a linoleum-chequered floor.

Rehearsals
All rehearsals involved all cast members due to most scenes being short. Three rehearsals a week were needed as we had a rather short rehearsal period
The cast were incredibly supportive during the rehearsal period. They came early, stayed late and generally did whatever they could to ensure their roles were real.
Some rehearsal time was spent discussing the girls who were sent to
Parramatta and how the treatment they received in the home affected the way they interacted with each other and the lives they led after release from the home.
The cast were spellbound as I read details of the treatment the girls had to endure in the home.

Lighting/sound
The difference between present time, with stark white light, and the past, with muted yellow lighting fading to sepia, worked perfectly.
There were minimal sound effects included in the show.

Costumes
Each cast member provided the basics of their own costumes, this being simplified by the fact that the play was either set in present time or in the past, where each girl also wore a calico pinafore, denoting the uniform the inmates of Parramatta Girls Home were made to wear. The exception was 'Maree' who was always dressed in the uniform of the home.

Audience
Beaumaris Theatre has become a theatre that alternates its shows between productions that will always pull a good crowd e.g. Dimboola, and the style of production that pushes the boundaries a little e.g. Closer and Night Mother. Parramatta Girls falls in the latter category and it did concern me that the subject matter may deter audiences. However, we were pleasantly surprised as most nights were generally at least half our normal capacity. Quite a number of audience members came because they remembered the riots at the Parramatta Girls Home, which took place in the early 1970's.

Summary
Even though the content of this play is horrifying and confronting in nature, I was pleased that I had directed it. I cannot say that the audiences 'enjoyed' the production but I was pleased to hear they were saddened, horrified and confronted by the treatment that the girls had to endure in the home. My thoughts go out to all those girls whose lives were changed forever because they were incarcerated at the Parramatta Girls Home. I would love to direct this play again at another venue if there are any other groups willing to put it on.