How to bring bad weather to your stage. 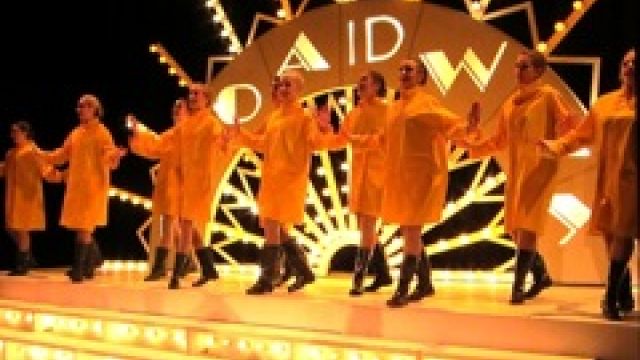 It was a huge challenge stagingSingin in the Rain in the historic Her Majesty’s Theatre in Ballarat. BLOC Music Theatre pulled it off, winning eight awards at the Victorian Music Theatre Guild Awards including Technical Achievement and Best Production. Scott Snowden reports.

What is the first thing you think about when you decide to produce Singin’ in the Rain?  Not surprisingly, when BLOC Music Theatre made that decision, the first question was how to make the rain. A fallback method was Wicked-like video projection combined with surround sound effects, however we were adamant that real rain should come to Ballarat and fall on the stage at Her Majesty’s Theatre. 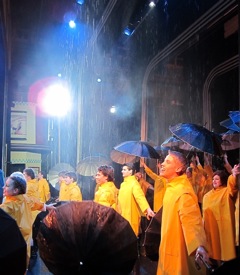 The mechanism for the rain was conceived by Damian Muller. Water was pumped from a tank in a sub-stage dressing room through valves in prompt corner up to cross-stage outlet pipes traversing the stage at fly gallery level. Once the water fell from the sprinkler heads and landed on the stage surface, which was skinned for protection, advantage was taken of one of the eccentricities of the Her Majesty’s stage – the rake.  Although it is often the terror of touring companies, the 1-in-25 slope guaranteed that water would flow downstage into guttering installed along the downstage lip of the stage. From here the flow simply gravity-fed back into the tank.

The storm clouds broke at the end of Act I for the Singin’ in the Rain number and again at the end of Act II for the full company finale. At the end of each act the beautiful gold-fringed red velvet house curtain had to be held just above the deck to keep it dry and prevent damage, and also to allow pooled water on the stage surface to be swept under into the gutter.  The optimum method for drying the stage took some trial and error to find, and the best sequence turned out to be a combination of brooms, mops and most importantly many, many towels.  Stage crew, props, wardrobe, dressers and makeup all mucked in to get the stage dry. 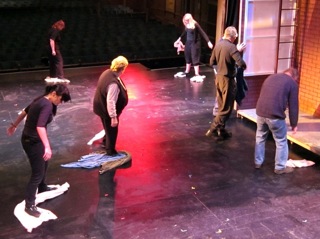 I was the Stage Manager and had ultimate control of the weather. This included when the rain started and stopped,  regulating the flow from light shower to torrential downpour, and keeping an eye out for safety.

The Act I rain storm was the simplest to control, beginning during a music interlude and continuing until the house curtain flew in for interval. The Act II shower, however, had to slot in with the choreography so as to be raining only in the 6 bars (10 seconds) when the dancing company had their umbrellas open. There were very tight start and stop cues, which were back-timed and refined during the dress rehearsals. 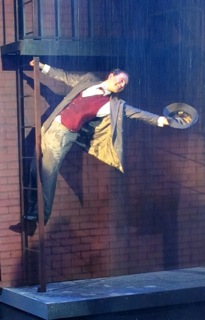 Callan Lewis (Don Lockwood) spent the most time singin’ and dancin’ in the rain. Sound Designer John Poynton specified that Callan be fitted with waterproof radio mic capsules plus a backup transmitter, which produced good reliability in difficult conditions. An appeal to the company for unused silica gel sachets was answered with enthusiasm, providing a quick-dry box for transmitters and capsules between performances.  John also found that no augmentation of the rain sound was necessary as the mechanism provided a very realistic sound.

After thirteen successful performances and their associated weather patterns, the show bumped-out with no water damage to the heritage-listed theatre. Further achievement came from the Music Theatre Guild of Victoria, with Singin’ in the Rain winning eight awards, including Technical Achievement and Best Production.

Since the awards, Ballarat, and indeed most of the state, has enjoyed above-average rainfall.

Originally published in in the Jan / Feb 2011 print edition of Stage Whispers.