I Heart Frankston the Musical 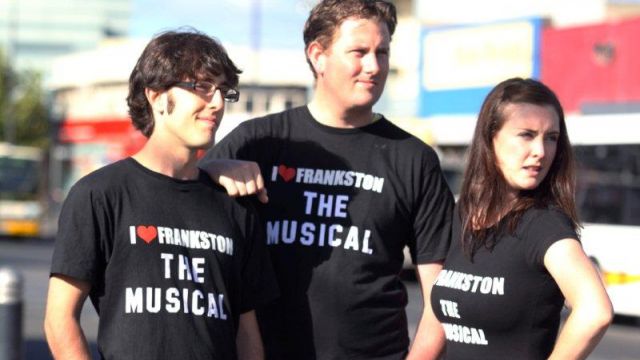 Cashed up Bogans, Centrelink queues, dream ballets and mullets. I Heart Frankston the Musical has it all – and much more. Bryce Ives has the inside story.

July 2009
I’m directing The History Boys, Gerard Lane is playing the role of Timms. I’ve been intrigued in the way he moulds and develops his character, often through sheer hard work and dedication.
Timms is most often described as the class clown, a lad full of fun and laughter. Gerard understands this, but brings something more to the role: behind that basic loud larrikin persona he has created a boy with strong ideals, often underestimated by his teachers and fellow students and above all of this … deeply intelligent.
During downtime Gerard speaks regularly about his idea to bring together a musical about Frankston, his beloved home suburb. I think it is a novel idea, but can’t see how the idea has any life outside of a few cheap shots at a suburb that is the butt of all our Melbournian jokes.

October 2009
Gerard and I have dinner and he casually mentions his idea again. This time I’m listening more closely: in between the obvious jibes and jokes, Gerard is utterly sincere in his love for Frankston and desperately wants to get this idea on the stage soon. He has just finished a one-man show and needs a platform.
He had adapted seven songs with our mutual friend, Melbourne musical maestro Adrian Portell (a former Frankstonian himself). He had the basis of a number of story-arcs, mostly to do with warring musical theatre gangs in a strange homage to West Side Story. (For some reason I suspect Gerard is going through a West Side Story phase. Maybe it will pass.)

November 2009
Gerard collaborates with Adrian to pull together a ten-minute version for the Short + Sweet Cabaret Festival at Chapel off Chapel. It takes the festival by storm, winning the Most Popular Award and catching the attention of the owners of The Butterfly Club, Melbourne’s premiere fringe cabaret club. They suggest that it should be developed into an hour-long piece for the Melbourne Comedy Festival. (I didn’t actually see it, because I was severely hung over. I watch it on video. It’s good.)

December 2010
Gerard formally asks Strange Bedfellow Productions (a company that I manage alongside producer Margaret Fisk) to produce the season. We agree and I ask for a copy of the script. Gerard replies, “There isn’t really a script, just a whole lot of great ideas.”
Task one for Gerard: write a script to support an hour-long version of the show.
Reviewing the Short +Sweet performance it becomes clear that we need more sex. Gerard has an idea for one of the characters to be an ecstasy-taking stripper by the name of Shazza. There is only one actress in Melbourne capable of taking on such a role: enter Laura Burzacott. Laura has played many different types of Bogan in the past, most recently in my production of Call Girl the Musical. I think she will be the perfect third collaborator for the show.
We agree on a simple premise: an extremist local mayor has banned musical theatre in Frankston. What was once a happy-go-lucky outer-suburban ghetto by the sea, where musical-theatre gangs serenaded teenage mums in the mall, has been transformed into a world where the sun doesn’t shine and it’s no longer legal for straight men to act gay.
Gerard furiously writes the script and one week before Christmas we gather together for our first reading. It’s clunky but it’s great to see Gerard developing the idea.
I head overseas for a white Christmas. Gerard promises me he will send me an updated script just after my Scottish New Year.

January 2010
I’m caught in a terrible snowstorm and find myself stuck at Cardiff Airport: one of the world’s most boring airports. After twelve hours of being stranded, a document arrives on my blackberry. It’s the new draft of I Heart Frankston. I scream out with laughter at a rap scene between Shazza and Gerard:
“I think we should sleep with other people, I know because I’ve already tried,
I know I said I didn’t, but I guess I lied….
I slept with everyone at Kentucky Fried.”
Back in Australia Strange Bedfellow have signed for a two-week run as part of The Butterfly Club’s Comedy Festival season. We are nervous. Will it sink or swim?

February 2010
Gerard, Adrian and Laura come together weekly and develop the piece. Some scenes work, others don’t quite hit the expected mark. Some new songs are written, others are dropped. We spend time each week stewing over the script. Can it be funnier? Does the story make sense?
Laura has a challenging role in the show: she has to play a variation of Bogan roles in the show. She starts researching, with regular trips to Frankston.

April 2010
With ten days to our opening, it becomes clear that we need an audience to play with. We’ve had enough of the rehearsal room. I suggest to our producer that we need to undertake a preview show. We arrange a secret show with the Butterfly Club, a performance for unsuspecting subscribers.
The lead-up to the preview show is nerve-wracking. The show opens at 9.30pm, the audience has no idea what they are seeing. The opening line gets a massive laugh. We have arrived.
We spend the days before opening night refreshing and revising the script. We cut, change and make it more audience friendly.
Margaret arrives at our final rehearsal with some big news. “Our entire Comedy Festival season has sold out.” It seems that the preview shows and our subtle online marketing campaign has worked. Audiences can’t get enough of our celebration of the bogan. We are the first show in the history of The Butterfly Club to completely sell out our season before opening night.