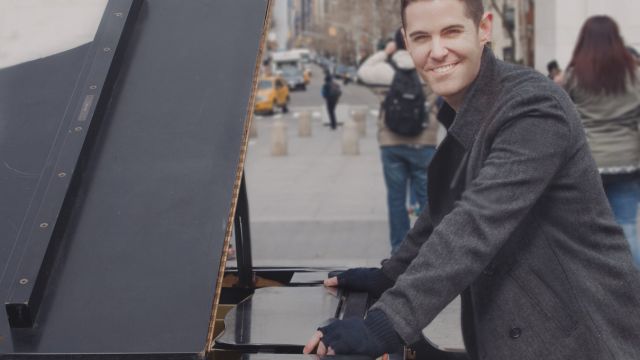 Musical Theatre Wunderkind Matthew Lee Robinson is bringing his exciting new programme to Melbourne and Sydney and Coral Drouyn wishes she could participate.

We have such an incredible wealth of musical theatre talent in Australia that it’s almost an embarrassment. One of the best, and the one unofficially voted “Most likely to take Broadway by storm,” is Matt Robinson, who now lives in New York, developing his musical Atlantis, with interest from Disney, and being mentored by Broadway icon Stephen Schwartz (Wicked, Pippin, Godspell). In fact Matt won the UTAS Stephen Schwartz Songwriting Award.

Matt has had musical productions here, and showcased both Atlantis and Happy People. I was lucky enough to see both and it would be wonderful to think these show would get full scale productions here and then go on to take the world by storm. The reality is, however, that big musicals are still, for the time being at least, developed overseas…so we will be importing home grown musicals by Robinson BACK to Australia.

We may have lost his talent to Broadway temporarily, but he is coming home next month  to create something never before seen in Australia. New Voices is a performance workshop and then showcase for our great young performers looking to make a career…or those looking to make the move to lead roles. What makes this so special is that participants will be assigned a song by the composer Matthew Robinson himself. Yes, that’s right…every song will be a song from a Matthew Robinson musical, and he will workshop it with you – and believe me they are truly great songs. Every participant gets a private coaching session on their song with Matt, participates in a two day workshop and then appears in a Showcase performance…a perfect chance to invite agents, producers etc. How I wish something like this had been available when I was young.

For those who have never seen or worked with Matt, he is a fine performer in his own right, with a killer voice. He knows exactly what it takes to make a music theatre performer realise every gram of their potential. There are only sixteen participants in each course so you will need to enrol very quickly. Not only will it be a great workshop…but I’m envious of all the fun you will have, and I will hopefully get to review the Showcase (the Sydney Showcase has been moved to Sunday 5th July).

This may be the first time you have sung a Robinson song but certainly, in the years ahead, it won’t be the last.