The Blonde, the Brunette and the Vengeful Redhead at Pymble 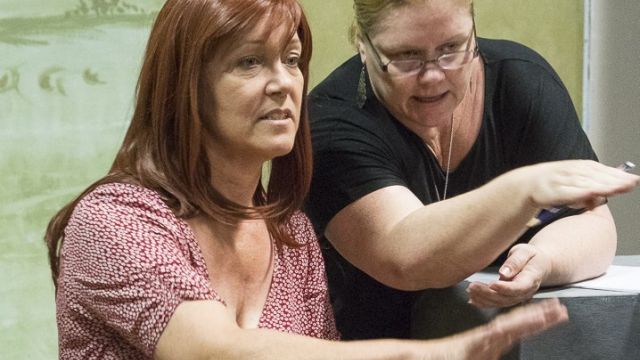 Pymble Players’ first productions for 2018 is The Blonde, the Brunette and the Vengeful Redhead, opening on February 14th .

This Australian comedy by Robert Hewett, tells the story of Rhonda, an ordinary suburban housewife, whose husband of 17 years suddenly leaves her. At a loss to understand his actions, and emboldened by her best friend Lynnette, redheaded Rhonda lashes out and loses control. The consequences of her actions play out across time and through a group of people brought together by that one ill-fated moment.

Three actors portray seven characters, each with their own perspective on the event and its impact - including the 80-year- old neighbour who observes the world from her front gate, the man in mid-life crisis, a Russian minx and the innocent 4-year-old boy struggling too early with life’s harsh realities.

Director Racquel Boyd, who previously directed Sylvia for Pymble Players has assembled a cast of three talented actors, Faith Jessel, Judy Jankovics and Murray Fane to bring this Australian comedy to the stage.

Book on line at www.pymbleplayers.com.au or through taz@taztix.com.au (type PYMBLEPLAYERS in the subject line of your email) or by phone 02 91441523 (Mon to Fri 11am -7pm).