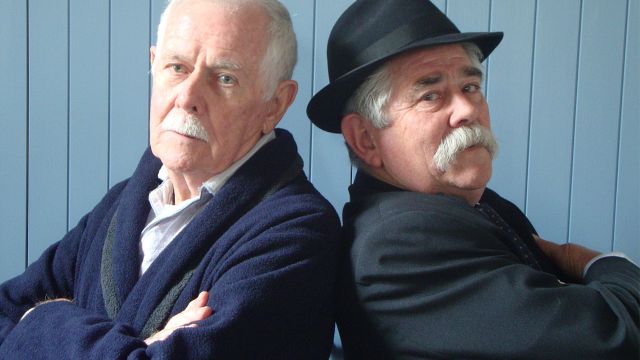 TWO legendary – and cranky – comics are being brought together for a reunion and revival of their famous act at the Old Mill Theatre during October and November 2017.

Written by Neil Simon and directed by Dale James, Lalapalooza Productions is presenting The Sunshine Boys where a young theatrical agent tries to re-unite his elderly uncle, a former vaudevillian great, with his long-time stage partner for a TV reunion.

The two old men have not spoken in 12 years and have numerous issues to work out before they are ready to return to the public eye.

Both touching and humorous, the play reveals a profound understanding of the stubbornness, childishness and professional neglect that is often inseparable from old age.

Playwright Neil Simon is famed for iconic plays such as The Odd Couple, Barefoot in the Park, Sweet Charity, The Last of the Red Hot Lovers and Biloxi Blues, among many others.

“The play is about a love-hate relationship between two friends and how they respect each other's ability but, after working together most of their lives, they end up in a bitter friendship,” James said.

“My inspiration for directing the play comes from Neil Simon's writing – he has the ability to show us the raw emotions and failings of people, usually with humour. “The challenge is to make this version a little different for the actors because, having previously done the show, they need to be enthused and fresh with their delivery, changing nuances where appropriate.”

Rex Gray plays Al Lewis, one of the vaudeville team known as “Lewis and Clark”.

“Over the course of 40-odd years, Al and Willie Clark not only grew to hate each other but never spoke to each other off-stage throughout the final year of their act,” he said.

“Much of the humour is derived from efforts to get the two cantankerous actors into the same room for a rehearsal, their differences of opinion once they re-unite and their shenanigans on the TV reunion broadcast.”

Tom Rees is Willie Clark, someone who has been living alone in a hotel room for 40 years.

“He feels he was abandoned when his partner Al Lewis retired after their 43-year collaboration,” he said.

“Willie struggles with memory problems, making it difficult for him to get work in the advertising industry.

“As a result, he is a sad and lonely old man who comes across as grumpy and quite often openly hostile.”

The main challenge, according to Rees, is getting the balance right between the grumpy, ungrateful old man and the frightened, lonely character within.

“Another is being able to switch between the belligerence towards Al and the expression of tender memories towards the man Willie once admired so much,” he said.