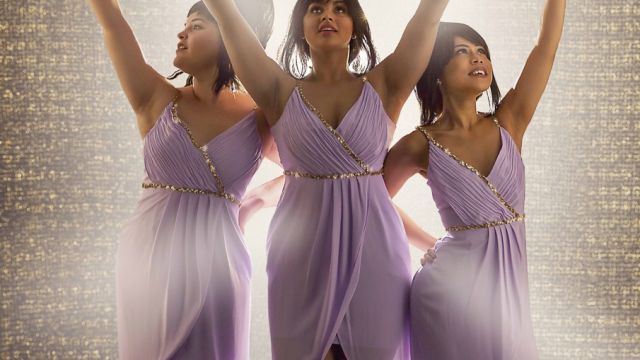 Sydney is about to enjoy the behind-the-scenes musical that takes audiences on a journey from Pop to Rock & Roll to Rhythm & Blues to Disco… and beyond!

DREAMGIRLS is about a time in American musical history when rhythm and blues blended with other styles of popular music creating a whole new American sound. Based on the show business aspirations and successes of R&B acts such as The Supremes, The Shirelles and others, this hit Broadway musical tells the story of a young female singing trio that crosses over to the pop charts in the 1960s to become music superstars. But as the group’s fame and fortune skyrockets, they realise that life on top is rocky.

Act One is set in the fabulous sixties — a time when we were still screaming at Elvis and bopping to the Beatles but were dancing to the new beat of girl and boy groups like The Supremes, The Marvelettes, The Temptations and The Shirelles. Act Two depicts the creation and the arrival of disco.

The music of DREAMGIRLS charts the musical contribution to America of a period whose importance we are only now — decades later — beginning to fully understand.

DREAMGIRLS is not just about singing and the dancing. The show also reveals the behind-the-scenes reality of the entertainment industry — the bitter rivalries and the heartbreak as well as the hard-edged business part of showbusiness that made possible this cultural phenomenon. Director Rod Herbert said he was thrilled to be able to add his own, new take on a hit show that is still playing professionally on London’s West End.

“We are showcasing some of Sydney’s best talent and they will take audiences on a journey of ups and downs faced by African-American performers during the 60’s and 70’s struggling for acceptance not only in American Society but also on the music charts and within their own industry. Audiences will fall in love with every character on the stage and will leave wanting more of the powerful and stunning voices of our cast!”