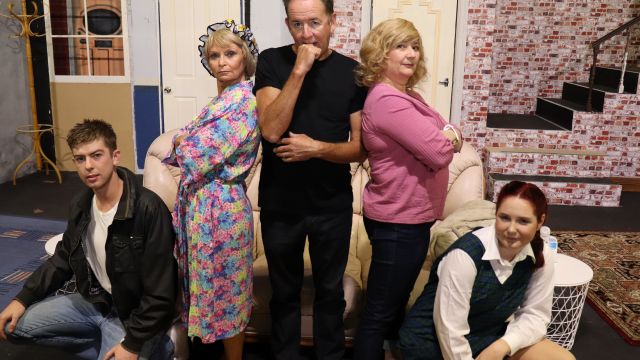 A SEQUEL to the farce Run For Your Wife is set to make audiences at Limelight Theatre (WA) cry with laughter all over again in May 2018.

He keeps his two families in different parts of London, both happy and blissfully unaware of each other.

But his teenage children – a girl from one family and a boy from the other – have met on the internet and are keen to meet, given they have so much in common including their fathers having the same name, age and occupation.

When John realises his children are about to encounter each other, he frantically tries to keep them apart aided and abetted by his lodger Stanley.

Mayhem ensues as the situation spirals out of control and John juggles the truth more and more outrageously.

Cooney is a veteran playwright, renowned for his successful farces, including Charlie Girl, Move Over Mrs Markham, Wife Begins at Forty, Out of Order and Not Now, Darling, which have been translated into more than 40 languages.

In 2005, he was made an officer of the Order of the British Empire in recognition of his services to drama.

“Caught in the Net is extremely fast-paced, so timing is everything,” Mrs Vincent said.

“The cast have to be spot-on with delivering their lines and getting on and off stage – the play doesn’t have any pauses, it just keeps moving.

“The set also has to be well-built and solid for the action that takes place.” A professionally trained actress and singer from the UK, Mrs Vincent trained at the Carona London Stage School and was a pop singer in the 1960s, recording three singles on the Decca label.

She came to WA in 1974 to work for Frank Baden Powell at his old-time music hall and then had an 11-year stint with the WA Opera Company before moving to Kalgoorlie where she worked for ABC radio and a local television station.

Over the years, Mrs Vincent has acted, directed, stage-managed and worked on sets for the Graduate Dramatic Society, Playlovers, Goldfields Repertory and the Old Mill, Bindoon, Melville, Stirling, Limelight, Marloo and Garrick Theatres.

With many awards for acting and directing, she was named best actress in a musical for her role in Blitz!, also scoring a Finley Award nomination.

“When I directed Run For Your Wife at Limelight Theatre in 2016 it was extremely popular, so I decided to direct the sequelbecause it continues the story and has a brilliant ending,” Mrs Vincent said.