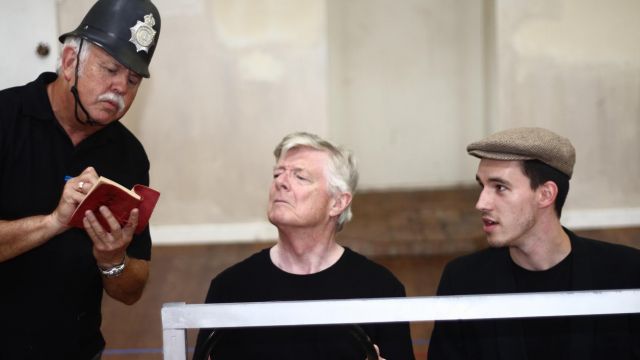 Hunters Hill Theatre (HHT) are celebrating the launch of their 2018 season with the Sydney Amateur Premier of a play based on P.G. Wodehouse’s Jeeves and Wooster novels.

Bertie Wooster (played by Jack Mitchell) takes over an empty theatre to stage a one-man show revolving around his recent adventures at Totleigh Towers. In typical Wooster fashion nothing has gone to plan and the show is not ready. Events quickly spiral out of control prompting his ever calm and faithful valet Jeeves (David Stewart-Hunter) to step in, enlisting the help of another valet Seppings (Ross Alexander) to perform the show in which Wooster plays himself while the valets fill the shoes of the other 9 characters.

The stories of Jeeves & Wooster are loved by many, and if you haven’t read the books, the characters may well be recognised from the UK television series P.G. Woodhouse’s Jeeves & Wooster staring Hugh Laurie and Stephen Fry, which ran for 4 seasons in the early 90’s.

Jeeves & Wooster in Perfect Nonsense is the first play adaptation to be authorised by the Wodehouse family, and started its life as a one man show for the Edinburgh Festival. It then evolved into the full-length production being staged by HHT, which was first seen on London s West End in 2013

Director Maggie Scott is delighted to be directing this comedy, her 7th stint directing for HHT, where she is also the President.

Jeeves & Wooster in Perfect Nonsense is playing from 16 to 25 March at Hunters Hill Town Hall, 22 Alexandra Street, Hunters Hill. Bookings can be made online at www.huntershilltheatre.com.au or on (02) 9879 7765.