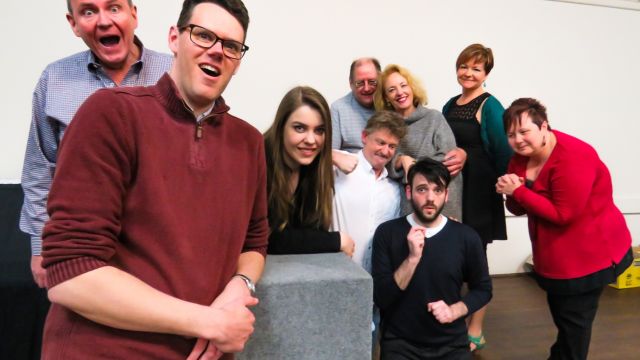 Adelaide’s Galleon Theatre Group is currently rehearsing for their November 2017 run of Alan Ayckbourn’s popular 1980 play Season’s Greetings, a comedy about the arguments, tears, forced merriment and crises of family reunions at Christmas.

Neville Bunker and his wife Belinda are the Christmas hosts, entertaining a former colleague of Neville’s, Eddie, along with his heavily pregnant wife Patti. Both marriages are desperately unhappy. The husbands are complacent bores and the wives feel unloved and neglected. Other guests include Neville’s alcoholic sister Phyllis and her husband Bernard, a GP, who is preparing for his annual Christmas puppet show. Belinda’s virginal unmarried sister Rachel brings along her new boyfriend Clive.

The explosive cherry on the comic cake is Neville’s near-psychopathic security guard of an uncle Harvey, who wears a knife strapped to his calf and is giving all the kiddies guns for Christmas. Harvey has prepared a few nasty surprises for the grown-ups too. The play was revived in London at the National Theatre in 2010 to great acclaim, demonstrating that Ayckbourn’s popularity never seems to wane as he continually proves himself to be one of Britain’s foremost playwrights.

The 2010 London production of Season’s Greetings starred Mark Gatiss, Catherine Tate, Oliver Chris, Katherine Parkinson, Jenna Russell, Neil Stuke, David Troughton, Nicola Walker and Marc Wootton.  In the hilarious narrative, Christmas Day at the home of Neville and Belinda Bunker turns into an epic day full of the unexpected and so it’s perhaps no coincidence that five of these actors have ties to Doctor Who, where the unexpected also abounds.

Season’s Greetings is Galleon Theatre Group’s fourth Ayckbourn comedy and following a recent stint performing, Kym Clayton is back in the director’s chair to direct it.

Clayton greatly admires the works of Ayckbourn and has very successfully directed two of Galleon’s three previous comedies by the playwright – Time of My Life and Bedroom Farce (both of these garnering nominations in the Adelaide Theatre Guide Awards). He has also directed Ayckbourn’s Relatively Speaking for Blackwood Players. The third production by Galleon of an Ayckbourn comedy was Absurd Person Singular, though not directed by Clayton. Ayckbourn himself once said of Season’s Greetings, "The family reunion, the pile of brightly wrapped presents, the log roaring in the grate, a children’s puppet show and a Boxing Day tea. Turkey dinners, paper hats, crackers and streamers around the base of the gaily-decorated tree.  An extramarital relationship, a couple of stray gunshots in the hall; all the ingredients for a traditional English Christmas."

As Samuel Beckett once bleakly observed, nothing is as funny as other people’s unhappiness. Most of us would agree families can seem particularly dysfunctional at Christmas, so now’s our chance to laugh at ourselves with the pre-Christmas treat of Galleon Theatre Group’s Season’s Greetings.

Images: The cast of Season's Greetings and director Kym Clayton.

Performance Dates - at the Domain Theatre

If you require Cabaret Seating please request when booking.

Tickets are $24; $20 concession (Pensioners and Seniors)