Can Clean Theatres Save Industry? 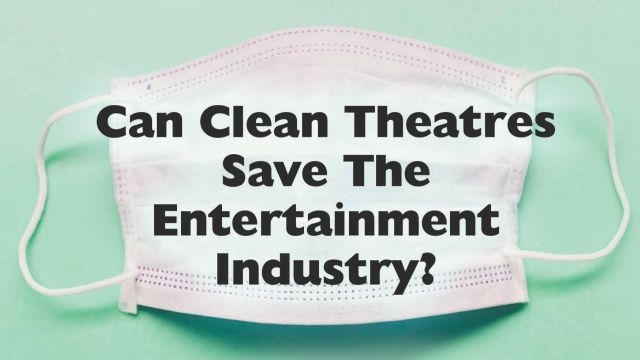 Last year I attended a theatre in the retirement belt of Florida. I recently received an email from the venue describing their new hygiene regime. Despite rates of COVID-19 increasing in the US state, the Wick Theatre was encouraging elderly patrons to bring their zimmer frames along, to enjoy cabaret and a meal.

At the entrance to the theatre, someone in a mask and gloves opens car doors. Patrons enter the venue by using different entrances, depending on their surnames, after receiving a temperature check.

Inside, waiters wear gloves to serve meals and drinks – which are all individually sealed. In every bathroom there is an attendant who cleans taps after everyone uses them. It looks more like a visit to a contagious hospital ward than a fun night out, but apparently it’s working.

South Korean producers are using similar measures to keep a touring production of The Phantom of the Opera, starring Australian performer Claire Lyon, on stage in Seoul (pictured below). The musical closed when the virus became a threat, reopened, and then closed down when a cast member contracted Covid-19. Since re-opening again, thermal imaging cameras are used to measure temperatures and there are self-cleaning antibacterial door handle covers. All audience members wear face masks and use hand sanitiser.

Andrew Lloyd Webber trialled a similar system at the London Palladium during July.

“The key thing that they have is incredibly good hygiene - both backstage for the cast, the crew and the orchestra but also for people in the front of house,” Lloyd Webber told BBC radio.

At the stage door, cast and crew pass an infrared camera where their temperature is taken remotely. LW Theatres’ Chief Executive Rebecca Kane Burton said, “as you walk in a great big dashboard flashes up [to indicate] whether you can come in the building or not. As soon as it does, the airlock releases, the door opens and you go in.” In Australia work is underway to develop our own hygiene code.

Graeme Kearns, the CEO of Foundation Theatres (Sydney’s Capitol and Sydney Lyric), told Stage Whispers, “we are working with the Live Performance Australia and others in the industry to develop a set of health and hygiene protocols for our audiences and production teams.

“Ideally the protocols will be uniform across theatres. Our goal is to ensure that theatregoers feel that we have taken every reasonable hygiene measure and feel comfortable that a visit to the theatre is safe.”

But what would a new hygiene code look like? Well, as a minimum we can expect that venues will regularly clean touch points in all theatres. The days of a quick vacuum and picking up ice-cream wrappers are over.

Venues will manage the density of their entrances and exits. This means crowded foyers and last-minute dashes into the theatre may be over for the time being. Instead, patrons may be asked to come earlier to a show and maybe leave a little later. Expect also to see lots of hand sanitiser around.

The first mainstage theatre to open its doors to a full production is the State Theatre Company South Australia, which is staging Gaslight in September. The production is being moved into a larger venue (Her Majesty’s Theatre - pictured below) to allow for spacing between patrons. However, Opera Australia has announced that its entire 2020 season in Sydney, Melbourne and Brisbane has been cancelled.

In Melbourne, the Arts Centre was scheduled to commence hosting Saturday night live variety in late June. Members of the public were urged to arrive 30 minutes before the performance to complete a pre-show health and safety check. The venue had a no contact ticketing policy and all audience members are obliged to leave their details, though they are not obliged to wear masks.

These performances were cancelled when the second wave of the virus hit Victoria.

Major producers of musicals say they cannot re-open if there are major restrictions on the numbers of seats they can sell.

Graeme Kearns said, “there is not much room for a checkerboard (theatre with space between patrons). The concept is fanciful for commercial operations.

A similar principle applies for state-based theatre companies, which also require several months of certainty to build their sets and promote ticket sales.

Medium to large community theatres are in a similar position. One of Australia’s largest community theatres, CLOC (in Melbourne) postponed its production of Priscilla, Queen of the Desert until the first half of 2021 “dependant on an easing of the social distancing requirements”.

This makes it easy to understand why producers are keen to have all restrictions lifted.

When might that be? Graeme Kearns is quietly confident that the industry will get back on its feet by the end of 2020. Disney’s Frozen is scheduled to open at the Capitol Theatre in December.

“The Government has a good handle on the situation. I have a high degree confidence that Frozen will open in December as planned, unless there is a new outbreak and widespread community transmission. That could push things back a few months.”

The timing of when theatres are confident of returning varies across Australia. In states where there have been low or zero transmissions, there is emerging confidence of salvaging some of the 2020 season.

The Queensland Theatre Company is planning a mini season from October, picking up from its interrupted season of Triple X.

Black Swan Theatre Company in Perth is proceeding with its November season of Oklahoma!

In Sydney, the Hayes Theatre Company was aiming for an October return with Young Frankenstein, however this must be in doubt with the recent outbreaks in NSW.

An independent production of the play The Credeaux Canvas has opened in Kings Cross with audience members offered masks and in seats spread out through the venue.

News is better in New Zealand with the ‘eradication’ of the virus, save for the occasional errant tourist.

Community theatre is back on the boards as early as August. Abbey Musical Theatre in Palmerston North is ‘rushing’ back its interrupted season of Sister Act.

The Auckland Theatre Company is not quite ready to welcome back its patrons yet. The Artistic Director Collin McColl said, “theatre projects of scale take months of planning before they reach the stage. When lockdown began we had to postpone and cancel many of the productions in our 2020 season. Unfortunately, we cannot reverse that decision.”

The company is pulling together a back on the boards festival for September and will be back to normal with a musical in November.

But even in COVID-19 free New Zealand, the new normal will look different “when we re-open strict hygiene will be in place”.