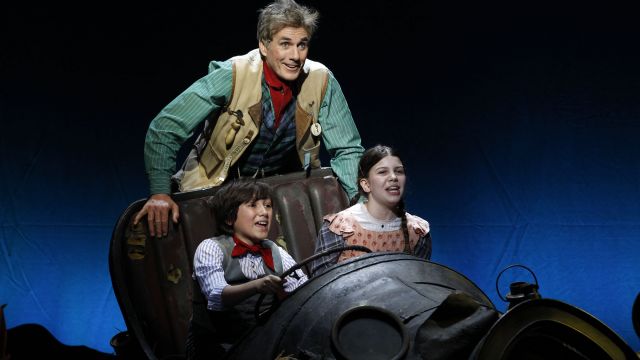 There’s a child inside all of us, no matter how grown up we may pretend to be. One can only wonder how Ian Fleming, creator of the great James Bond, found his inner child to write Chitty Chitty Bang Bang – one of the world’s best loved children’s stories and films. Now it’s a musical and, after a successful run in Sydney, it has its official opening tomorrow night (Saturday February 2nd) in Melbourne at the theatre we lovingly call “The Maj”. There’s not a sign of the suave famous spy, but there are baddies and heroes galore.

Directed by the prolific Roger Hodgman, and with songs by the Sherman Brothers – Richard and Robert, the show was created from the movie which we no doubt took our kids to see, or sat through, wide-eyed and gobsmacked ourselves, in the darkened cinema. It’s been the longest running musical ever to play the London Palladium and nominated for 26 awards in total including its Sydney awards last month. It has a huge cast, great stage stars in David Hobson, Rachael Beck, fabulous sets and costumes and even a flying car. Yes, I’ve seen it for myself, it really does fly and I was instantly transported back to childhood. The car itself…dear Chitty…is the most expensive prop ever made for the British stage and has pride of place in The Guinness Book of Records. It’s a simple story with a highly sophisticated production. And yet, it’s not a show which springs to mind as one of the all time greats. That is about to change for Melbourne audiences. It’s only rarely that we get a musical that we can take the kids to see and know we’ll enjoy it just as much. We had Annie and Mary Poppins last year, but it’s a New Year, and that means new delights. Chitty Chitty Bang Bang is guaranteed to make you feel like a kid again, and isn’t that something we all need from time to time?