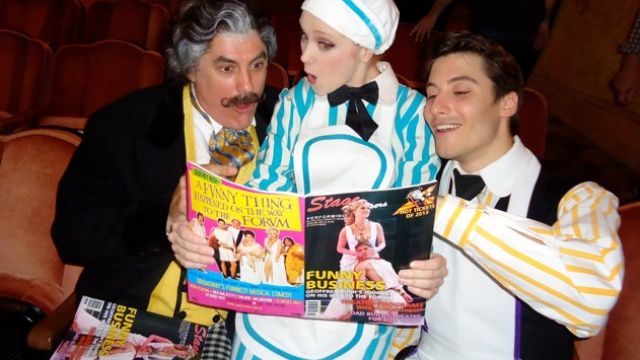 Prior to Opening Night of the Australian Premiere of the stage musical version of Chitty Chitty Bang Bang at Sydney’s Capitol Theatre Neil Litchfield had the opportunity to chat with ensemble members Francine Cain and Nathan Pinnell, along with Tony Farrell, who plays the role of Lord Scrumptious.

Neil Litchfield: Tell me about how each of you came to be involved in the show. Had you seen the movie beforehand?

Francine Cain: I actually didn’t know anything about the show to start with, and I hadn’t seen the movie at all. Part of the rehearsal process was creating this magic that I was unaware of. It wasn’t until I got into the theatre, having the car, the set and the costumes, that I realised the show is just mesmerizing and absolutely magical. After the rehearsal process I’ve gone back and watched the film for the first time, and it’s really something special. What we’ve got here is pretty much a replica of those feelings you get watching the film.

Neil: Was it good for you not to have seen the movie?

Francine: Absolutely. The rehearsal process was pretty fast-paced and exciting at the start, and you didn’t really have time to think about what you were doing. Then once we got onto the stage everything just seemed to fall into place and we started to think about ourselves, and each other, and the characters we were creating. You thought you had brought something to life; then seeing the movie I thought, I don’t know how I’ve created it and replicated it at the same time.

Neil: Do you have a favourite moment in the show? 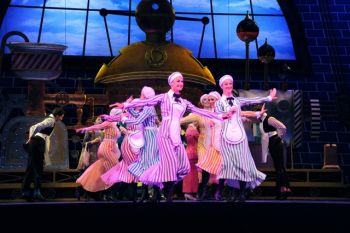 Francine: I love the opening. It’s just like the opening of the movie, with the credits rolling and the excitement over the car at the Grand Prix. Having that feeling on stage; being so excited about Chitty, is really great.

Nathan Pinnell: I had seen the movie and loved it. A friend of mine, Dana (Jolly), was choreographing, so thought I’d love to be in it. I’m a dancer primarily, so I really wanted to do something that challenged me dance-wise. We do some amazing numbers in the show like “Me ‘Ol Bamboo” and ‘Bombie Samba’, and Dana has choreographed it to all our strengths, which is really great. My favourite moment in the show is probably doing Bombie and Bamboo because they’re high-energy dance numbers, and we get to whack them out every night.

Neil: And you say Dana has choreographed it to your strengths – what are those strengths of yours which we’ll see in the show? 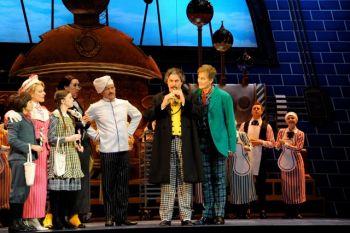 Tony Farrell: My experience is very different of course, because I’m twice the age of both of the others put together. Chitty Chitty Bang Bang was the first motion picture I saw in my life, and it had a profound effect on me. I remember leaving at the end of Act 1 in absolute mortal fear that those people were going to die as they plunged over the cliff. And of course having seen it many, many times again with my four children, the oldest being 21, and then 14, and of course Beaumont, 8, who happens to be in the show, and my youngest daughter Elizabeth, 6, who is about to start her first production in Wind in the Willlows over in the Botanical Gardens here during the summer vacation, they’ve all been through the same experiences that I have – absolute mortal fear of the Childcatcher, which Tyler Coppin is doing a brilliant job of. I didn’t actually audition for the show. I was approached shortly before the rehearsal process started and asked if I would like to come on board. I was absolutely thrilled to be given the chance. One of the things I’m really touched with is the amount of enjoyment that the full cast are having with this production. You can see people affected. The first time we saw this machine fly up in the sky there wasn’t a dry eye. We were moved. It’s a wonderful experience. I can’t wait for people to come in here and have the same feelings that we’re having, because I know it’s just gorgeous.

Nathan :It’s fast actually. It’s surprising. I thought it would be slower than what it is, because primarily it’s based around the principals and their journeys, but for an ensemble member I find it so quick. There’s so many costumes to change out of, wigs, make-up – all the layers of costuming.

Francine: It’s kind of chaotic, but it’s fun chaos. There’s nine dogs and 36 children, and so many props and sets and numerous things going on backstage that it really does keep you going.

Nathan: And great people. We have a laugh. 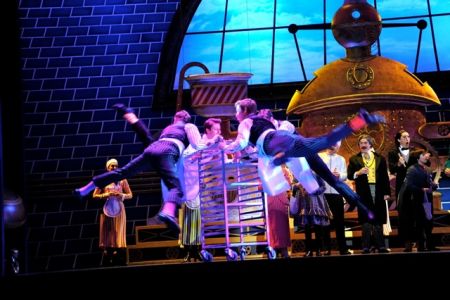 Tony: We’re really blessed, because everyone is comfortable with each other.

Nathan: There’s a lot of love.

Tony: It’s an incredibly generous cast from top to bottom.

Nathan: You don’t feel like there’s any demarcation at all.

Francine: On the same level.

Nathan: It’s one of those shows that I feel everyone will love – dads, mums, grandmas, kids – no matter who you are

Neil: What is it that you think makes the show work across those age ranges?

Nathan: They’ve been very clever with the script, in the sense that they’ve got a chlldren’s story, but then they’ve got some adult themes in there.

Francine: And everyone’s got an inner child in them

Tony: I think what’s going to make this show special for all of us as a cast, is that over your career you do some shows which just affect you, and this is going to be one of those shows where we will talk about it in ten or fifteen years time as, ‘do you remember when … ‘ It will be one of those shows. You can feel it already.

Francine: I think a moment that stands out for all of us is at the end when the car flies off the cliff. We’ve seen it for about a month in the rehearsal room, and we’ve seen them on chairs miming it with their hands up in the air, but it wasn’t until about a couple of days ago when we saw the car fly for the first time with the lights and the orchestra. We were screaming with delight and fear.

Tony: And singing under it – what Peter Casey has done with the choral line under it – it’s 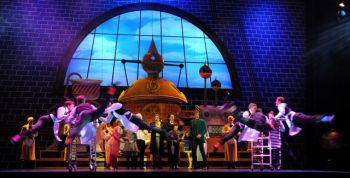 amazing. We’re pumping it out side stage, and it feels like we’re flying with the car.

Francine: We knew what was coming, but we just weren’t ready for it. A really funny moment has been working with the dogs. It’s taken a while. Some of them are divas. We have nine dogs, and sometimes we have one dog run on stage.

Nathan: What about the time when the dog just came and sat down?

Francine: … waiting for the treat. We have food-driven dogs that just want the treats. Sometimes they prefer the wings or they prefer one performer to anyone else …

Francine: … and they chase them upstage. It’s taken a while, but I think we may have got there with the dogs.

Nahtan: And the kids have been terrific.

Tony: One of the fun things has been having my son in the show, who’s a very shy, retiring little boy at eight years of age (laughter all-round). He’s the youngest by two years, but this boy has provided us all with a tremendous amount of joy because he’s just so unaffected. The other day when Roger (Hodgman) was saying ‘today we’re going to work on our energy, and keeping our energy up,’ and you hear this little voice go ‘Yeah!’ 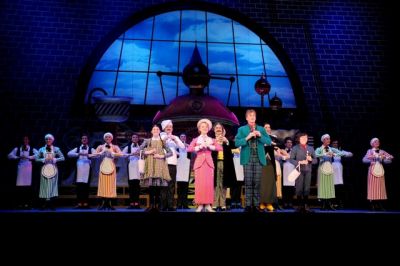 Francine: I can honestly say that Beaumont is going to be the star of the show. Remember that name?

Neil: How has it been working with your son in the show Tony?

Tony: It’s interesting. I’ve just come out of Annie, where I was working with my wife. We had seven or eight months of being on stage together, and it’s good. Ange (Angela Kennedy) and I have been in the business long enough to know that you have to allow each other to do the job, so you keep things very even, but Beaumont will still see me side-stage and run up to me and want to give me a hug and a kiss while we’re in costume. I noticed yesterday at the end of the show he just wanted to jump into my arms as the curtain came down, rather than get off to come on for his bows, which was really cute, but also, ‘Mate, job to do, job to do, get it done’.

Francine: But it’s not a job for him, it’s still a dream.

Chitty Chitty Bang Bang  had its Australian Premiere at Sydney’s Capitol Theatre on November 17, 2012 with a Melbourne season at Her Majesty's Theatre from January 30, 2013.