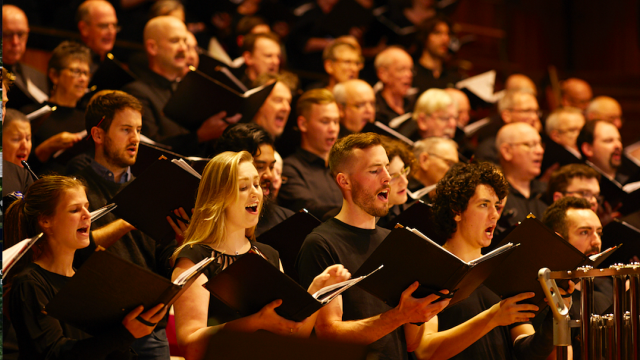 Sydney Philharmonia Choirs is set to celebrate its Centenary in 2020 with a future-focused program, shining light on Australian composers, and on the organisation’s longstanding commitment to collaboration, community and connection.

At the heart of their Centenary celebrations is the commissioning of “100 Minutes of New Australian Music”, to be premiered as part of the Choirs’ 2020 Season.  Works from 12 Australian composers will make their debut as part of the initiative, including four on the international stage, as part of a European tour in October.

Comprising a variety of works created to varying length, scale and theme, the composite “100 Minutes of New Australian Music” will showcase a uniquely Australian contribution to the art form of choral music.

Highlights will include a series of works by Indigenous Australian composers, offering both chorister and audience a distinctive performance experience; and a new major work from Brett Dean, to be premiered in partnership with leading orchestras across Europe.

At least one of the new compositions – ranging from pieces for small ensembles to those for large massed choirs, will be performed at each of the organisation’s concerts, rolling out throughout their anniversary year.

Whilst marking 100 years since 12 church choristers first met in 1920, forming the original “Hurlstone Park Choral Society”, Sydney Philharmonia Choirs will also pay tribute to the many collaborations and partnerships that have seen the organisation mature over the decades, informing their position as Australia’s leading choral organisation, recognised around the world for its contribution to Sydney’s vibrant artistic and cultural identity.

Long Sydney Philharmonia Choirs’ performance home, and a frequent programming partner, Sydney Opera House formally acknowledged their longstanding relationship with the Choirs in August 2019, by welcoming the organisation as a Resident Company. It is only fitting therefore that the Choirs’ 2020 Centenary Season begin here, with a free open-air performance, heralding the coming year with a nod to Australia’s premier city; and to past, present, and future possibilities. 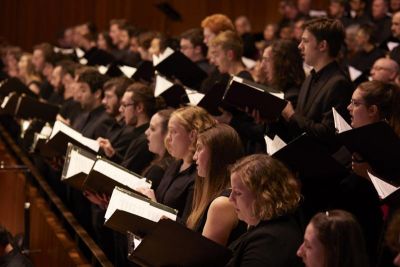 On Sunday January 19, as the first rays of light break over Sydney, a Dawn Chorus will begin, comprising hundreds of singers from the Choirs’ 600 strong membership, gathered on the steps of Sydney Opera House, conducted by Artistic and Music Director, Brett Weymark. Markedly, the opening note of the year will go to the world premiere of a choral Acknowledgement of Country, Tarimi nulay - Long time living here (Gadigal language), composed by acclaimed Indigenous Australian soprano and composer, Deborah Cheetham: the first of the Choirs’ commissions to make its debut as part of “100 Minutes of New Australian Music”.

With eyes to the future, Sydney Philharmonia Choirs also embraces new relationships in 2020, and revitalises long-standing friendships with both the City Recital Hall and the Sydney Town Hall.

In February the Choirs will partner with City Recital Hall to present the Australian premiere of Craig Hella Johnson’s Grammy- nominated oratorio, Considering Matthew Shepard. Written in response to one of the worst anti-gay hate crimes in history, this moving work commemorates a young American college student who was kidnapped, beaten, tied to a fence and left to die, in Wyoming in October 1998.

In April the Choirs present the first of their large scale concerts for the year, in the stunning surrounds of Sydney Town Hall. A significant space, where so many of Sydney Philharmonia’s performances have occurred over its 100-year history, the Town Hall will host four of the organisation’s major 2020 presentations, beginning with their Easter Saturday concert, St John Passion Reimagined.

The dramatic power of Bach’s St John Passion has transcended its church origins to speak a universal, musical message that combines storytelling and meditation. In this re-imagined performance two specially commissioned “reflections” by Australian composers, Joseph Twist and Brooke Shelley, are embedded in the narrative, commenting on questions posed by this great work, and providing musical and philosophical reflections for the modern era.

Come May and Sydney Philharmonia’s 400-voice Festival Chorus will fill the Town Hall with the exhilarating sounds of Mendelssohn’s choral masterpiece Elijah. Based on the Old Testament story, it’s a thrilling musical picture of “a grand and mighty prophet...borne on the wings of angels” and featuring Teddy Tahu Rhodes as Elijah. This is the first of the Choirs’ participatory events for the year, with rehearsals starting in February.

In June, Sydney Philharmonia Choirs present their showpiece Sydney concert for the year, A Centenary Celebration. An epic performance across three acts, this spectacular concert will celebrate 100 years of singing, and the ever-evolving cultural fabric of the city the Choirs call home.

A Centenary Celebration features a major new work from Elena Kats-Chernin; the Sydney premiere of a new work from Deborah Cheetham; new works from James Henry and Nardi Simpson; and a mash-up of the top ten choral masterpieces at the core of the Choirs’ repertoire, created for the Philharmonia by Dan Walker.

And in October, the Choir’s ChorusOz program comes to the Town Hall, drawing hundreds of participants from around Australia and beyond, for an intensive weekend of music-making, culminating in a one-off performance of Verdi’s great masterpiece, his Requiem. 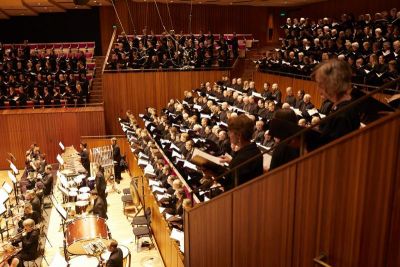 Also in October, 120 choristers from the Choirs’ acclaimed Symphony Chorus, Chambers Singers and VOX choirs, will embark on a “Centenary Tour”, premiering a unique portfolio of new Australian choral music by Brett Dean, Matthew Orlovich, Daniel Brinsmead and Will Yaxley, to audiences in the UK and Germany.

Presented in collaboration with esteemed local orchestral partners including the City of Birmingham Symphony Orchestra and Chorus, the Berlin Radio Symphony Orchestra and Lyon National Orchestra, the tour represents an exceptional opportunity for European musicians to learn and present new Australian music, and for audiences to experience the latest Australian creativity and innovation.

In November, Sydney Philharmonia Choirs returns to the Sydney Opera House Utzon Room to present Transcendence, a concert in honour of the patron saint of music and musicians, Saint Cecilia. The chant-inspired music of visionary American composer Lou Harrison provides the framework for a garland of choral tributes from composers across the ages, including new works from Maria Lopes and Andrew Anderson.

As the finale for their 2020 celebrations, the Choirs will take their Christmas Carols event to Western Sydney, presenting two performances of Carols at the Coliseum, at Sydney’s newest venue The Sydney Coliseum Theatre. This will be a family-friendly program based around Robert Shaw’s Many Moods of Christmas, featuring baroque classics, show tunes and everyone’s favourite Christmas carols.

Sydney Philharmonia Choirs’ Artistic and Music Director Brett Weymark says, “2020 is a very special year for us at the Sydney Philharmonia Choirs, celebrating the extraordinary milestone of 100 years of singing together. So how do you celebrate 100 years of music making? You create something new - hence our ambitious project of 100 minutes of new music to celebrate our centenary. 100 for 100! An opportunity to explore our past, the present and our future as an artistic force in our city.

“We have major works being presented by our choirs in Sydney and abroad, from international names such as Brett Dean and Elena Kats-Chernin, to emerging artists and even members of our own choirs. In 2016 we made a commitment to the female voice in the compositional world with our contribution to the National Women Composers Development Program and this continues in the coming year, under the watchful eye of Liza Lim.

“In 2020 we launch a program that embraces the Indigenous Australian voice in choral music. Each concert this season will commence with a sung Acknowledgment of Country - Tarimi nulay - Long time living here (Gadigal language), written by the acclaimed Deborah Cheetham and Matthew Doyle, alongside new works by Nardie Simpson and James Henry. This is the start of an ongoing cultural conversation with the First Nations peoples of Australia and one we know will enrich the lives of our singers and our understanding about how we can better shape the future of this country.

“In an age where many people express despair at a lack of connection with each other, live music-making continues to be one of the most dynamic exchanges of energy we have as a society. Composers share their vision with performers who then communicate directly with an audience in a relationship that is closely connected. People watch, listen and feel. They forge a connection that can profoundly change the way we look at the world. We cannot wait to share the gift of music with you.”

Find out how to sing with the Choirs, here:

Carols at the Coliseum