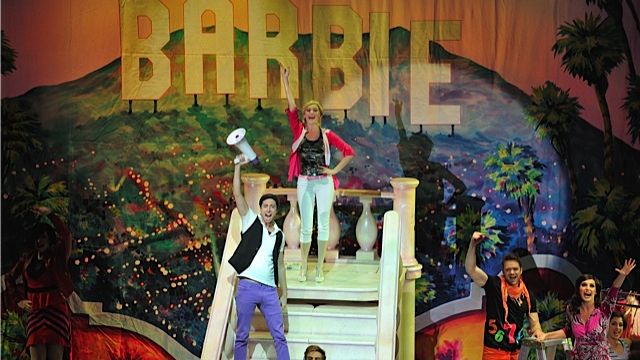 You try hard not to get cynical as a critic; not to compare everything to the Tony Award winners, the blockbusters like Wicked, but sometimes you have nights that scream the warning “Not another musical”. Well DON’T listen to that scream. Barbie LIVE isn’t meant for critics, or for Tony award snobs, or long-term music theatre tragics. It’s meant for young girls aged 4-14 and their parents or grandparents, and it’s Sparkaliciously AWESOME.

My epiphany came in the interval, when I was looking for negatives and trying to remember how to spell kitsch. I looked up and saw dozens of little, very little, girls in princess costumes or best party frocks. They had never met each other before and yet they were all dancing, all connecting, all sharing the love. They even went up to the Barbie Logo on the side monitors and shouted, “We love you Barbie.” An 82-year-old granny from Greece sitting next to me said with a sense of wonder, “I never see anything like this in my life. Is beautiful colours. Wonderful.” And so it was. Barbie connects….and that’s what counts. 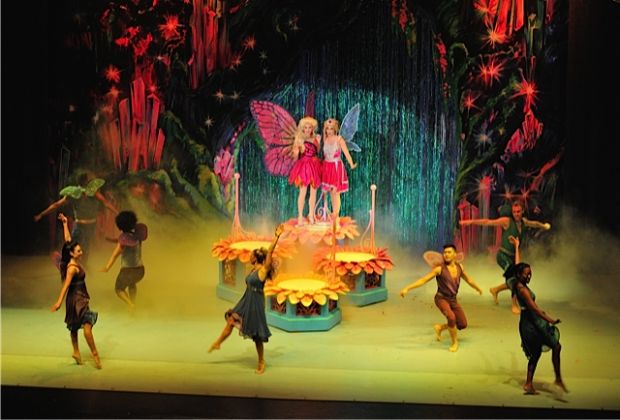 Kobi Rozenfeld knows his stuff. His choreography is mighty fine, though some of the dancing itself was quite sloppy in places, and not just where it was meant to be (the dancers more than redeemed themselves in the final number). The cast is terrific, vocally strong and with a delicious sense of comedy. They understand this is 1960s kitsch, but they treat it with reverence. Chelsea Bernier is ‘all that and more’ totes ‘to die for’ as Barbie. Kristina Miller as her best friend Teresa, who lacks the confidence to be a star, was her equal. These two girls are true triple threats and as they sat on the stairs and sang ‘Rise Above It All’ I felt like I was watching Kristen Chenoworth and Idina Menzel 25 years ago. The two “baddies” ( well…mildly not so nice) are fabulously played by Courtney Cheatham (Raquelle) and Rebecca Warm (Peg). Great comedy work from both, admittedly painted with broad brushstrokes. Warm’s channeling of Cindi Lauper was a delight throughout. The fabulously named Keir Kirkegaard impressed with great warmth and dancing as Danny, Nick Bernardi was a fabulous “villain” in several guises and Austin Johns was charmingly nerdy as Ken…a very underdrawn character. 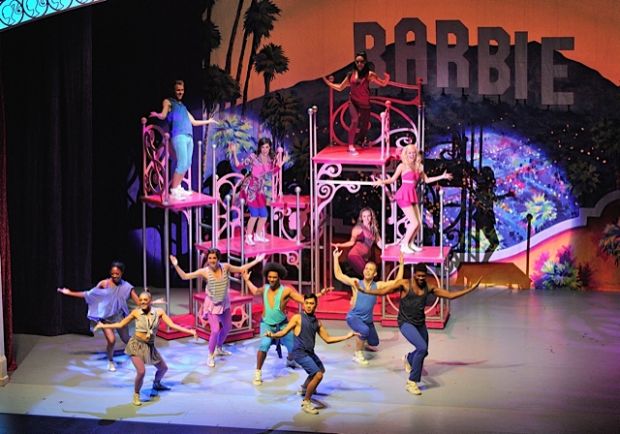 The sets are clever and always impressive (design by Stanley A Meyer) and set changes are covered cleverly with footage on the side screens from Barbie movies as Barbie tells her friend the lessons she learned from her movie roles. Diane Rodriguez has given us a book that’s simple enough for 5 year olds, but with some little gems for the adults. The level (and placement) of the simple audience participation is spot on. It enforces positive values about believing in yourself, and not listening to others. The anti-bullying message is simple and subtle…Barbie really has grown up. The music by Robbie Roth is unashamed pop, but there are at least two really singable songs in “I wish I had her life” and “Get Your Sparkle On.” Oh, and the costumes by Aviad Arik Hermann are all ‘heaven on a stick’. There are more sequins than you’d see at Gay Mardi Gras, and even the metallic hot pink streamers at the end couldn’t be ignored. The whole aura is dazzling.  Now, excuse my gushing girly head…..I’ll put my critics hat back on to deal with the negatives….er….give me time. I’ll get back to you.