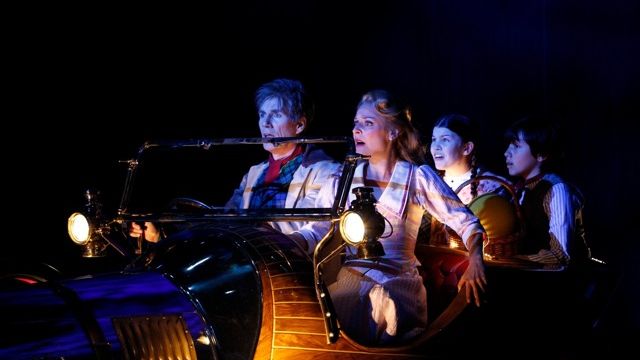 Music and Lyrics by Richard and Robert Sherman. Adapted for the stage by Jeremy Sams and Ray Roderick. Directed by Roger Hodgman. Her Majesty’s Theatre. Melbourne Opening Night: 2nd February, 2013

If Chitty Chitty Bang Bang is more a delightfully fluffy and well decorated confection than a sumptuous feast, it’s certainly not the fault of this production, which started its official Melbourne run last night. Director Roger Hodgman has maximised the delights for children while still maintaining adult interest, no mean achievement. But, put simply, there’s a fabulous car, and it floats, and it flies; and once you’ve seen that (and it truly is spectacular), the rest of the show no longer seems that important. So plot holes are forgiven and the songs – which pale into insignificance compared to the Sherman Brothers other hit Mary Poppins – are instantly forgettable except for the repetitive title song, which all of us left singing last night. 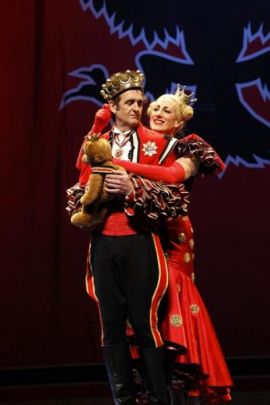 This is an unapologetic throwback to the musical comedies of the mid 20th century, and it relies heavily on casting, especially of the comic relief. Fortunately the show has great comic performances, most notably by Jennifer Vuletic  - hysterically funny in a Fanny Brice manner as the Baroness Bomburst. Her wonderfully angular body lends itself to contortions that almost eclipse the rubbery facial expressions. What might surprise some who don’t know her work is the astonishing voice that she brings to the very funny “Chu-Chi Face”. She’s quite wonderful. Alan Brough, as her emotionally retarded husband, The Baron, is low key but still a suitable foil for her and has some delicious moments of his own. It’s never explained WHY the Baroness hates children, but that would probably only bother pedants like me.

The two spies - Goran (George Kapiniaris) and Boris (Todd Goddard) - milk every laugh from their comedy business. They’re both played with great finesse by actors who understand that fine line between slapstick and burlesque; a formidable duo.

Peter Carroll is delightfully scatty as Grandpa Potts and Tyler Coppin as the Childcatcher makes the most of a watered down role made great by the late Robert Helpmann. Mr Coppin’s talents are underused, but that is the fault of the book, not the actor.

But the sugar that binds the confection together is, of course, the relationship between the Potts family and Truly Scrumptious. David Hobson gives us a very different Caractacus Potts. Far from being the slightly bashful, geeky, insecure eccentric that Dick Van Dyke created for the film, Hobson owns the stage. He’s brash and confident and appealing in a sophisticated way, but without the guilelessness that makes Caractacus endearing. There’s no doubting his vocal ability, especially in the delightful “Hushabye Mountain”, but the big surprise is that he makes a good fist of the dancing in “Me Ol’ Bamboo” – perhaps the show’s best production number. Still, the brashness is disconcerting. I kept imagining him as Professor Harold Hill in The Music Man. Rachael Beck, delightful though she is, is vocally wasted for most of the show. However her glorious rendition of “Lovely Lonely Man” is well worth waiting until mid second act for. It’s a rich velvety commanding voice, totally different to those of our other two major leading ladies, and pure in tone; just beautiful. The Potts children, Jeremy (Beau Woodbridge) and Jemima (Lucille de Meledo) were absolutely delightful. They might have stolen the show were it not for the pack of dogs, in assorted colours, sizes and breeds, whose three cameo appearances delighted the audience, old and young alike.

Anthony Ward’s set and costumes are a joy to look at and Maestro Peter Casey (where would Music Theatre be without him and Michael Tyack?) and his orchestra bring uniform excellence to a less than inspiring score.

But it’s Chitty herself that you’ll leave talking about:- an absolutely stunning prop capable of transporting us back to childhood. How does she fly? Who taught her such good manners? These are among the great unanswered questions of the universe. Take your children, if only to reassure yourself that magic still exists.