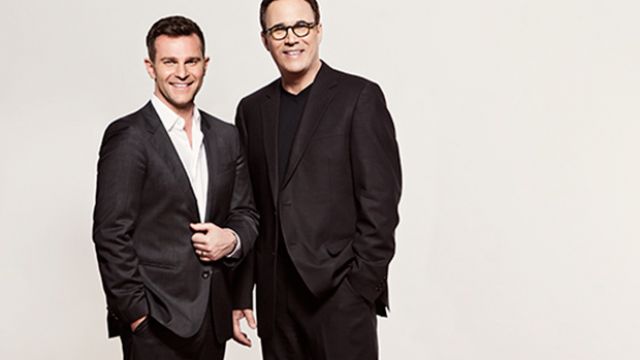 There are few musical theatre composers that rival John Bucchino. Just like Sondheim, singers flock to Bucchino’s work because of his poetic storytelling set to detailed and melodic music. From heartbreaking ballads to upbeat anthems, in the hands of a good actor, Bucchino’s work can simultaneously uplift, inspire and bring you to tears.

David Campbell’s are strong and sturdy hands. In David Campbell Sings John Bucchino, Campbell supplies charm, wit and a superb voice that frequently gives you goosebumps. He is a brilliant interpreter of Bucchino’s music and the pair have great chemistry.

David Campbell Sings John Bucchino retells varied chapters in Bucchino’s life that inspired his songs, which either Campbell or Bucchino sing. Hearing tales of how the pair met and Bucchino’s journey to eminence give intimate insight into the workings of the entertainment industry as well as snapshots of the pair’s amicable personalities and deep love of music. Bucchino standards like ‘Grateful’, Taking The Wheel’ and ‘Unexpressed’ are mixed with lesser known but equally powerful numbers like ‘Playbill’ and the chilling ‘I Stayed’.

It is an honour to have John Bucchino on tour in Australia and The Hayes Theatre is a perfect venue to cater for such an intimate show. David Campbell has one of the best voices in Australian musical theatre that cries out to be showcased in a mainstage musical production.