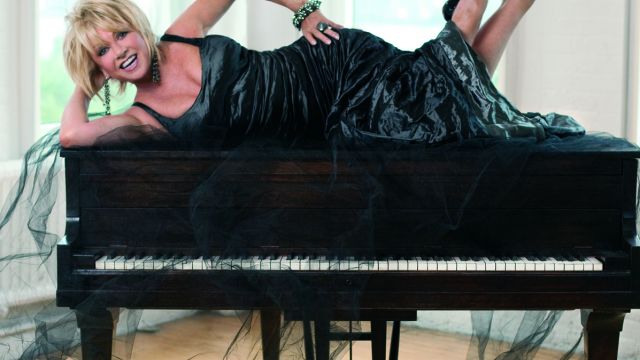 Elaine Paige has a beautiful natural warmth that quickly endears her to her audience, and a relaxed natural performance style that translates well to Australian audiences. In her first performance on the Australian leg of her tour, she was troubled by technical difficulties, but delivered an excellent program.

Accompanied by a seven piece band (some of whom become a jazz combo in the second act) Elaine Paige delivered a performance that included most the songs from her musical theatre performances. Beginning the show in a beautiful silver grey evening gown, she included songs from Evita, reappearing later in the first act, dressed as Norma Desmond from Sunset Boulevard. After interval Ms Paige appeared in a pewter gown with a multi-metallic hemline for a section of jazz songs, before finishing the evening in a charcoal feathered dress for a section that included songs associated with Edith Piaf and Memory from Cats.

Between songs Ms Paige spoke casually with her audience and she dealt with technical issues in an open and comedic manner. The Guest Artist in this production is New Zealander Nic Kyle, a musical theatre artist with an amazing voice who wowed the audience. His songs were received by rapturous applause which rivaled the star performer and the show would be worth seeing for his performance alone.

While the sound quality was excellent, I was disappointed with many technical aspects of this concert. The stage felt cluttered by the presence of packing boxes and a visible stage manager or tech with computer screen on one side. A teleprompter was visible at centre stage, with its constantly moving lyrics facing the audience. Elaine appeared to have difficulty negotiating the stairs at centrestage, which seemed both narrow and steep. Lighting, while very fancy felt very abrupt and lacked empathy with the performers. Most disturbing was the follow spot operation, which felt so hesitant and nervous that had it been a community theatre production I would have offered to go up in the second act and baby-sit the operator. Ms Paige's grand entrance was ruined by an abortive follow spot, her light was cut during applause, she was forced to pull her guest artist into the light; it was shaky and several times she had to verbally or physically ask for light. This would have been a disappointment at a show on the end of the pier or in an amateur setting, but at a professional venue in a major city with an international artist this was unforgivable.

I am hopeful that the technical disappointments will not follow Elaine Paige to other cities on her tour. This is a thoroughly enjoyable concert for anyone who enjoys musical theatre or the beautiful voice of Elaine Paige.